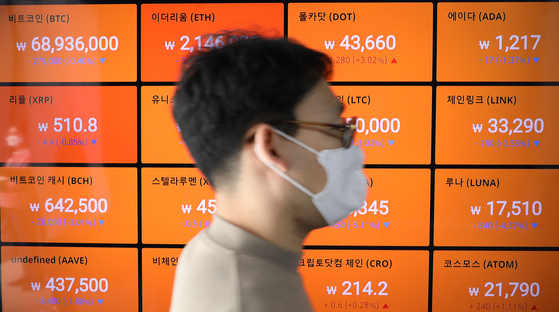 A digital screen operated by Bithumb and set up in southern Seoul shows bitcoin prices on Monday. Bitcoin traded at around 69 million won ($61,000) on Monday after soaring to as high as 71 million won on Sunday. [YONHAP]

Businesses dealing with virtual assets including cryptocurrencies must report their transactions to a government body and abide by anti-money laundering requirements, the Financial Services Commission (FSC) announced Tuesday.

An amendment to Reporting and Using Specified Financial Transaction Information will be effective from March 25.

The amendment mandates all businesses dealing with the exchange, storage and management of virtual assets to report their business to the Korea Financial Intelligence Unit, an FSC body responsible for implementing anti-money laundering practices in Korea.

Those planning on opening new businesses related to virtual assets must first report to the FSC body. Those already in business must report to the body within six months.

If businesses fail to report by Sept. 24, six months from when the amendment takes effect, they will face up to five years of imprisonment or fines of up to 50 million won ($44,200).

The revision was put into place amid growing concerns about the use of crypto assets for money laundering and other illegal activities, according to the FSC.