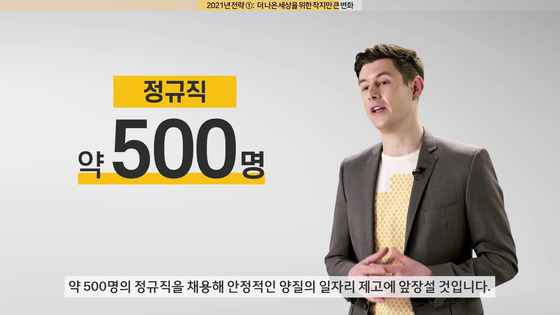 Antoni Martinez, McDonald’s Korea managing director, speaks in a video, where he announced the company’s results and the goals for this year. The video was released to the press on Tuesday. [MCDONALD’S KOREA]


McDonald’s Korea reported a 9 percent growth in revenue last year, led by its Best Burger initiative and a jump in delivery orders.

On Tuesday, it announced its revenue, excluding franchises, grew 9.1 percent to 790 billion won ($705 million). Revenue, including franchisees, was up 7 percent on year.

The Best Burger initiative is a global campaign undertaken by the company in March last year to upgrade burger quality.

McDrive drive-through and McDelivery, delivered via motorbikes, contributed to the surge.

McDrive sales grew 23 percent and McDelivery sales were up 36 percent on year, according to Antoni Martinez, the company’s managing director in a video released to the press on Tuesday.

Martinez celebrates one year as a managing director in Korea.

He added McDonald’s hired 530 new full-time employees last year – the highest figure since the company entered the Korean market in 1988. The company plans to add 500 full-time positions this year, like restaurant department managers.

Martinez said the company will concentrate on increasing the speed of service and introducing new concepts like tandem drive-throughs, which allow two cars to place orders at the same time.

He mentioned technological innovations, like AI-driven automated customer interactions and GPS-based order tracking as a few examples of what the company plans to adopt in the near future.

Martinez added the company will up its effort to address the environmental issues.

“More than 400,000 customers a day visit McDonald’s Korea. That is 200 million customers every year. This is indeed a privilege and something we are incredibly proud of, and a big responsibility,” he stated. “We will further expand and accelerate investments for sustainable growth that coexists with the future, environment, and society.”