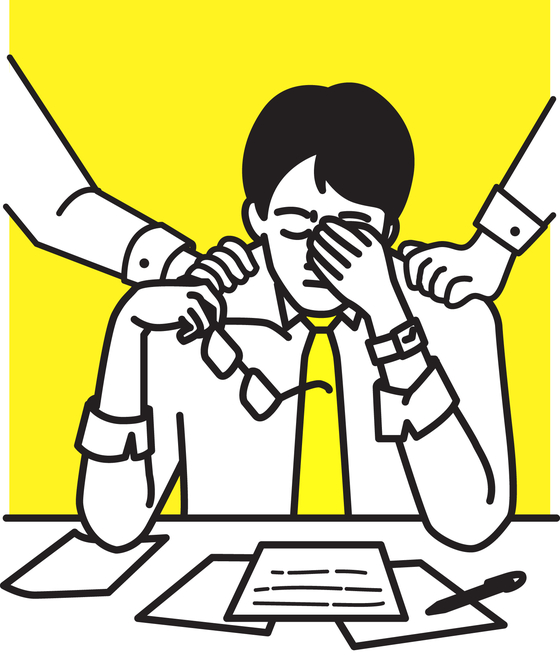 'Kkondae' is a term used to describe someone who patronizes younger people or junior colleagues or forces their ideologies and experiences on them. Originally a derogatory Korean slang which referred to stubborn elders, the term has evolved to represent an attitude rather than an age group. [KOREA JOONGANG DAILY]


After her workplace decided to make employees adhere to a 52-hour workweek, leaving the office every day became an awkward event for a 24-year-old surnamed Lee, who is working as an intern in the finance industry and asked that her first name not be disclosed.

“Despite the 52-hour limit, many of my senior colleagues stay behind to work overtime. Every time I’m about to leave the office around 6 p.m., they always tell me, ‘Back in my day, we didn’t even have a 52-hour workweek limit. We used to work all night!’” said Lee. “They don’t force me to stay, but seem to imply that I’m not working hard enough, which is totally unfair.”

This kind of person who patronizes younger people or junior colleagues or forces their ideologies and experiences on them, despite not being much older or wiser themselves, is referred to as a “young kkondae.” Kkondae is derogatory Korean slang which is roughly the equivalent of the English slang “boomer.” The term originally referred to stubborn elders, but has evolved to represent an attitude rather than an age group.

The growing popularity of the term is well reflected in pop culture. The 2018 KBS series “Radio Romance” shows a 28-year-old woman who insultingly scolds a junior colleague for not greeting her. Not saying hello to someone older, especially to one’s senior colleagues or upperclassmen, is considered rude in Korean culture.

Webtoon “Bokhakwang” (2014-) and webtoon-based film “Cheese in the Trap” (2018) depict college upperclassmen who constantly patronize underclassmen and even dictate what they can wear, based on true campus stories. 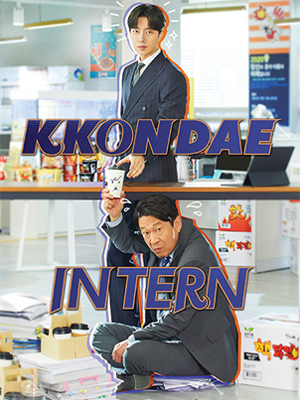 “Kkondae”: a hierarchical mindset, not a generation

“I define kkondae as someone who views human relationships as vertical, not horizontal,” said Lim Myung-ho, a professor of psychology and psychotherapy at Dankook University. 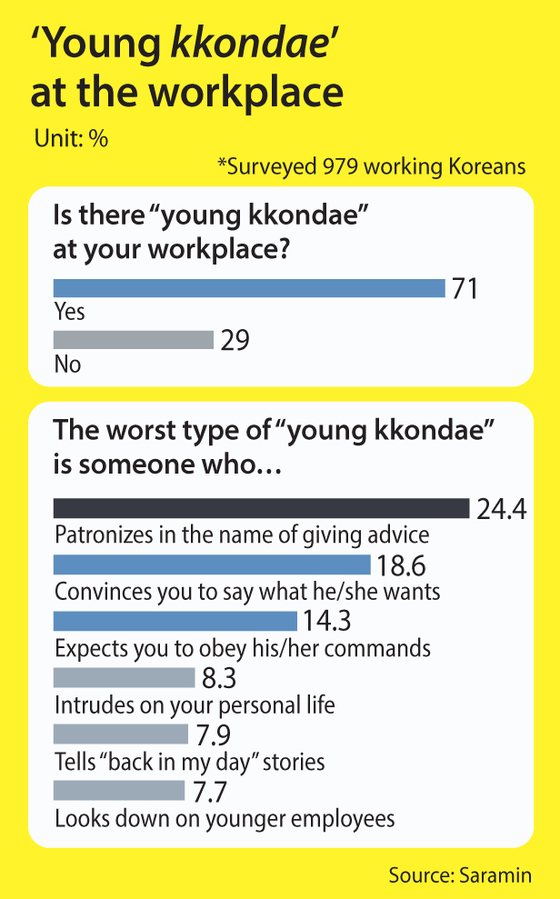 
Because being a kkondae is a mindset, not a generation, anyone can become one regardless of age. As a result, young kkondae seem to be just as prevalent as stubborn elders in Korean society. According to a 2020 survey by job search website Saramin, 71 percent of working Koreans said their workplace has at least one young kkondae.

“Any organization with some kind of hierarchy is bound to have a kkondae, even schools,” said Kwak Geum-joo, a professor of psychology at Seoul National University.

“In the workplace, hierarchy is based on how long someone has worked there, and hierarchy in college is based on what year someone is in. Just a little sense of a seniority can lead someone to become a kkondae.” 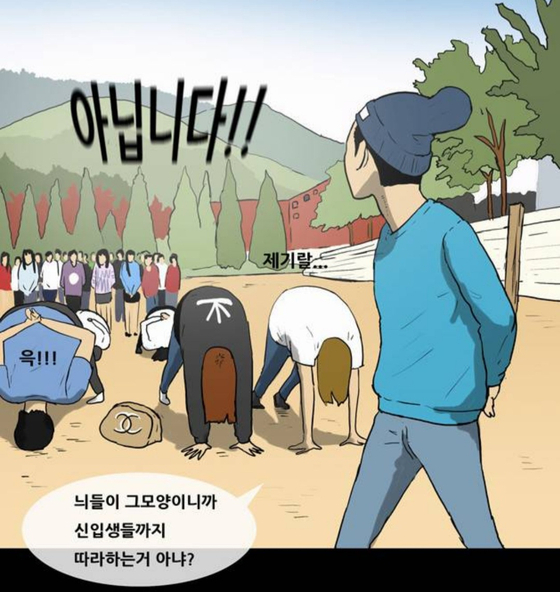 A scene from Gian84's webtoon "Bokhakwang" (2014-), in which college upperclassmen punish underclassmen for disobeying them. [SCREEN CAPTURE]

What makes people vulnerable to becoming a kkondae?

“A sense of superiority is in fact extremely natural; it’s almost a survival instinct for one’s self-esteem,” said Lim. “But most people have social skills to stay modest and try to hide those thoughts. Kkondae lack that ability, or think they look more competent and powerful when they display kkondae behavior.”

“Korean culture is very hierarchical,” said Kwak. “The fact that the Korean language has honorific forms plays a big role: When we [Koreans] meet new people, we have to know their age to decide whether to talk in honorific form or not. So it’s completely normal in Korea to ask the age of someone you’ve just met, although it is perceived as impolite in other cultures. We have to be conscious of our age in everyday life.”

Age is indeed a central factor in Korean social life. In YouTube channel ODG’s video of a five-year-old and seven-year-old meeting each other for the first time, the children’s first question to each other is “How old are you?” In the tvN reality show “My Very First Social Life" (2020), a six-year-old girl is greatly offended when a five-year-old girl calls her “you” instead of eonni, the honorific title for an older female.

In YouTube channel ODG’s video of a five-year-old and seven-year-old meeting each other for the first time, the children’s first question to each other is “How old are you?” [SCREEN CAPTURE]


Kwak added that the Confucian value of respecting the elderly also creates the notion that older people are always wiser and thus should be listened to.

“Korean society’s emphasis on rank also plays a role,” she said. “In Western culture, coworkers address each other by name, but Koreans call their coworkers by rank: Assistant manager, manager, director, executive director, and so on."

Some major Korean companies have attempted to change such rank-based culture. Conglomerate CJ has instructed its employees to address each other as nim, a Korean honorific title, since 2000. This measure even includes Chairman Lee Jay-hyun. Companies such as Kakao and Watcha make their employees call each other by their English names. However, the effort has not led to any visible change in Korean corporate culture, and some companies including KT and Posco have abandoned this practice.

“The peak of such rank-based hierarchy is in the military,” Kwak said, “which leaves a lasting impact on most Korean men who serve mandatorily.”

At the same time, Kwak stressed that age and rank are simply some of the many criteria that kkondae can derive a sense of superiority from.

“Even years after being discharged, men who served in the military often feel they are superior than men who were exempt from service. The list of reasons to feel superior is endless, but age is most common since it is the most generally applicable criteria.”

Due to such cultural context, even children may internalize the social hierarchy and imitate adults’ kkondae behavior. An anonymous interviewee in her 30s shared her experience regarding teenage kkondae with the Korea JoongAng Daily.

“I attended school in New Zealand, and there was a clique of older Korean girls that I didn’t know personally. One day, they called me and a few other Korean girls out, because we didn’t say hello to them properly when passing by.”

“They made one girl kneel on the ground and slapped her across the face, telling us to learn from this experience,” she continued, “and threatened to shave off our eyebrows if we didn’t say hello again.”

Although that kind of violent reaction is not the norm even among kkondae, the anonymous interviewee said she noticed how strong this age-based hierarchical mentality was even among Korean children living outside of Korea.

“Of course, Western society also has strict hierarchies in sports clubs and whatnot,” she said. “But even in those cases, you don’t get social power over people you don’t personally know at all just because you’re slightly older.”


“Younger kkondae are harder to handle”

In the 2018 KBS series “Radio Romance," a 28-year-old woman scolds a junior colleague for not greeting her. [KBS]


People who have dealt with both elderly and young kkondae say that the latter is much more difficult to handle.

“Kkondae in their 20s and 30s are a lot more stressful to deal with, because I spend more time and interact more with them due to our similar age range and rank,” said Lee. “They are the ones who directly watch and evaluate my performance, so they impact me more than my middle-aged bosses.”

“When an elderly kkondae starts patronizing me, I just nod and pretend to respect their wisdom coming from age,” said a college student surnamed Yoon. “They just want their age and experience to be respected. But a young kkondae doesn't stop there. They are convinced that their logic is always correct, so they must prove you wrong and intellectually inferior. You can’t win with them. And the worst part is that they think they’re more reasonable than old kkondae, so there is no room for improvement.”

“Young kkondae are never aware that they are being a kkondae,” he said. “That’s why they repeat kkondae behavior. But since we often hate people who have the same negative traits as us, young kkondae probably dislike elderly kkondae.”

However, some kkondae may have their reasons as to why they can’t help but behave that way.

“My office recently hired a new employee, and she is my first junior colleague. Since she is still getting used to her job, she is often slow or makes mistakes,” said an anonymous interviewee in her 20s, who works in the public relations sector.

“When she makes a mistake or fails to finish a task in time, it becomes my responsibility to fix it. So sometimes I’m not happy with the way she does things, and I end up giving her advice or telling her how she can get things done better. I hate how I might be becoming a kkondae.”

Lee also shared her ambivalent feelings toward her young kkondae bosses. “Although I hate awkwardly leaving the office, it’s true that they’ve experienced a harsher work environment. And sometimes, there is indeed something to learn from their patronizing, since they do have more experience.”


How not to become a young kkondae

In the tvN reality show “My Very First Social Life (2020), a six-year-old girl is greatly offended when a five-year-old girl calls her “you” instead of "eonni," the honorific title for an older female. [SCREEN CAPTURE]


Then how can people distinguish trying to be helpful from being a kkondae? Lee Byoung-hoon, a sociology professor at Chung-Ang University who specializes in industrial labor relations, has a suggestion.

“I would describe the current situation as an ‘anomie,’ in which the younger generation is challenging the older generation’s norms,” Professor Lee said.

“Both sides dislike and distrust each other, but simply condemning each other is not constructive. Communication is the only solution, and that’s why major Korean companies host educational forums and workshops to create an opportunity for different generations to understand each other. When people step outside of their own generation and values to think outside the box, maybe we will have a more equal and respectful work environment.”

Professor Kwak also has a tip based on her experience with students.

“Chances are you didn’t know everything from the start either,” said Professor Kwak.

“You also learned through experience. So let younger people go through trials and errors on their own as well. You may think your advice can help them not make mistakes, but that’s a kkondae’s delusion. Unsolicited advice does nothing for younger people until they experience it on their own terms. So stop pushing your experience onto them. Instead, wait until they ask you for advice first, and be ready to answer when asked.”