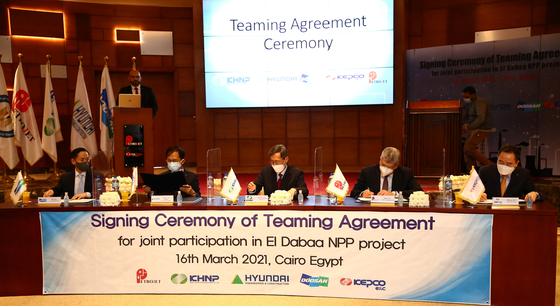 KHNP CEO Chung Jae-hoon, center, signs a partnership agreement with Petrojet in which Korean companies will train locals on the development of a nuclear power plant in Cairo. [KHNP}


The Korea Hydro Nuclear Power Corp. (KHNP) announced that it will take part in a Russia-led nuclear plant project in Egypt.

Korea's state-own nuclear plant operator on Wednesday said it signed a partnership agreement with Petrojet, an Egyptian state-owned company specializing in designing and constructing energy infrastructure, in Cairo on March 16.

Under the agreement, KHNP will work with Egyptian companies to train local nuclear power plant employees.

Other Korean companies that will participate in the partnership include Kepco E&C, Hyundai E&C, Doosan Heavy Industries & Construction, all of whom worked on a nuclear plant project in the United Arab Emirates (UAE).

Korea won its biggest overseas nuclear plant project in the UAE in 2009.

One of the stipulations by the Egyptian government for foreign company participation is that the nuclear power plant project needs to be localized, meaning 20 to 35 percent of employees must be Egyptians.

“In participating in the El Dabba nuclear power plant project, we will help Korean companies that specializes in nuclear plant related materials and equipment to succeed in Egypt, which will bring new breath into the [Korean] nuclear power plant industry,” said Chung Jae-hoon, KHNP CEO.

Four VVER-1200 reactors are to be constructed, and groundbreaking on the project is scheduled for next year.

JSC ASE plans to award engineering, procurement and construction (EPC) contracts, which the Korean state-owned nuclear company is vying for.

[WORD_ON_THE_WEB] 'I’d feel too self-conscious to use the system'