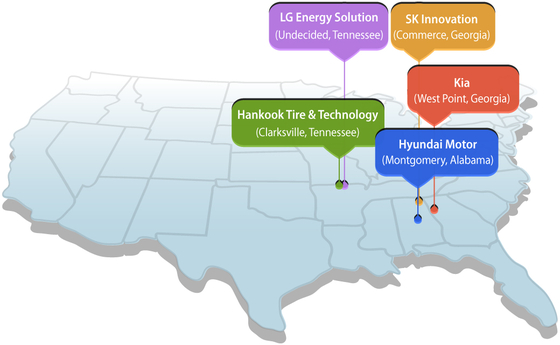 Korean automakers and related parts makers are joining a new industrial base in the southern part of the United States, ditching the Rust Belt area which used to be at the center of the country's industrial boom before the 1980s.

The Rust Belt refers to a region in the northeastern part of the United States which used to act as an industrial hub for steel and manufacturing businesses.

Starting with Hyundai Motor and Kia, battery and tire makers from Korea are rushing to build manufacturing plants in the southern states of the United States, mostly in Georgia and Tennessee.

Hankook Tire & Technology, Korea’s biggest tire maker and the world’s seventh biggest, opened its first overseas production plant in Clarksville, Tennessee in 2017 with an $800 million initial investment, after receiving a reported $72 million in incentives from the state and the city.


It recently announced an additional investment plan of $90.2 million, bringing the total to nearly $1 billion. Production capacity will total 11 million tires a year from the current 5.5 million.

“With global carmakers building their production plants in the south, Tennessee stood out as a suitable production base for Hankook Tire which vies to diversify its suppliers,” said Jang Hyun, a spokesman at the company.

Hankook Tire’s Tennessee factory currently makes tires only for the after sales market, not for direct installment at factories.

“It usually takes three to four years for the tire maker to directly source its products to the carmakers' factories. Hankook Tire is definitely looking to win such a deal with its Tennessee plant. It will just take a few more years,” Jang added.

Battery makers, a key supplier to auto manufacturers amid the aggressive transition to electric vehicles (EVs), are also committing hefty investment in the southern states to expand production facilities. 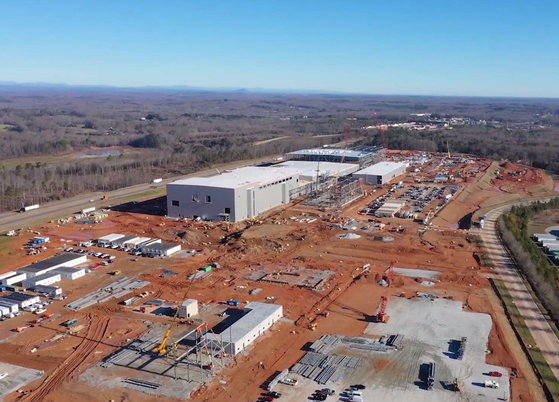 The plant, which could be shutdown due to SK Innovation's defeat in a battery trade secret lawsuit with LG Energy Solution, was supposed to produce 21 gigawatt-hour (GWh) capacity once completed in 2023 and deliver its batteries to Volkswagen’s EV factory in Chattanooga, Tennessee.

“Logistics play a big role in the auto supply chain and building an adjacent factory is oftentimes included in the requirements of securing a supply deal from a carmaker,” said a spokesman from SK Innovation.

“Georgia was picked for such reasons, among many factors including incentives.”

SK Innovation received at least $300 million as part of an undisclosed incentive package.

LG Energy Solution, after building its first U.S. factory with General Motors (GM) in Ohio, recently picked Tennessee as its second manufacturing base supposedly because of the proximity to GM's EV plant.

GM pledged to commit $2 billion to its Spring Hill, Tennessee-based factory to convert its existing facilities dedicated to internal combustion engines to electric ones.

“After experiencing an auto boom in the Rust Belt, the United States is vying for a second of its type, this time in the southern states, with eco-friendly engines at the center," said Park Chul-wan, an automotive engineering professor at Seojeong University.

Volkswagen’s Chattanooga plant is the German carmaker’s North American base for EVs, as it promised an $800 million investment last year to expand the facility.

Tesla, the world’s biggest EV maker, is also ramping up its presence in the south. It is currently constructing its second U.S.-based auto factory in Austin, Texas. It will be responsible for building the Cybertruck, Model 3 and Model Y for the eastern half of North America.