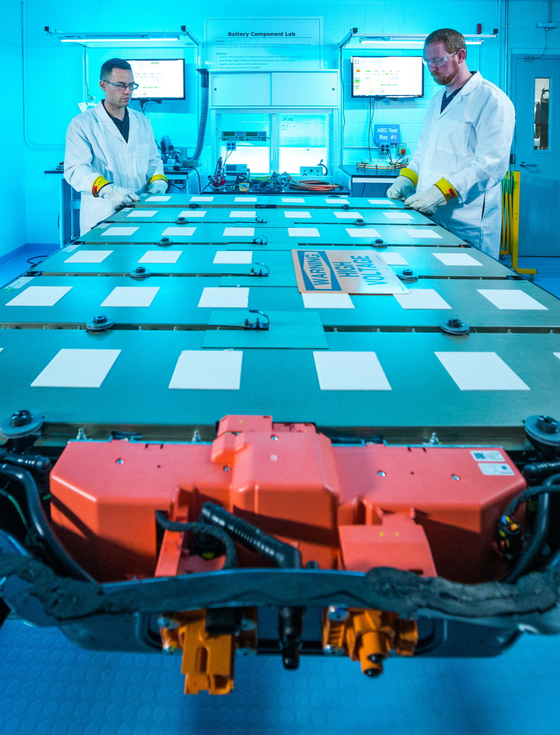 Photo taken in GM's Battery Electrical Lab on Feb. 25, 2020. This facility now follows GM-mandated guidelines to help protect against the spread of COVID-19, including mandatory use of face masks and social distancing. [GM]

While electric vehicles (EVs) may be an essential part of achieving environmental goals, lithium-ion batteries that power them pose a threat to the objectives in several ways.

The mining for raw materials needed in the lithium-ion batteries, such as cobalt and manganese, requires processes that emit carbon dioxide. Lithium extracted from the batteries also contaminate water and soil if thrown away.

Due to the fast growing EV industry, the battery recycling market is expected to grow by tenfold by 2030 to 20 trillion won ($18.1 billion) from 1.6 trillion won in 2019, according to SNE Research.

Stakeholders of the EV industry are preemptively coming up with solutions that will potentially make the lifecycle of lithium-ion batteries more sustainable.

Lithium-ion batteries for an EV usually have a lifespan of 10 years.

Under the partnership. waste battery cells will be sent to Li-Cycle, which will recover valuable materials including cobalt, nickel, lithium, graphite, copper and manganese, using what's called hydrometallurgical process. The recovered materials can be used when making new batteries.

Ultium Cells says that nearly 95 percent of the raw material of the cell can be recycled in making new batteries.

"The hydrometallurgical process through which these battery materials will be recycled emits 30 percent less greenhouse gas than the traditional process, helping minimize environmental impact," the Detroit-based automaker said in a release.

Ultium Cells and Li-Cycle will begin the recycling process in the latter half of this year.

LG Energy Solution, the world's No. 2 EV lithium-ion battery producer, has been committed to utilizing used batteries from EVs in an eco-friendly way.

It recently installed an energy storage system (ESS) at Ochang, North Chungcheong, which is made of used batteries that have been removed from electric taxis that have driven at least 100,000 kilometers. The 100-kilowatt ESS is able to fully charge a General Motors Bolt EV with just one hour of charging time.

SK Innovation, the world’s No. 6 player in the EV battery market, was recently acknowledged for its battery material recycling technology which extracts lithium from batteries. Such proprietary technology from SK Innovation was verified by Argonne National Laboratory, a state designated research institution in the U.S., to have an effect of reducing greenhouse gas emissions by up to 74 percent compared to obtaining such materials from mines.

Hyundai Motor is also running a pilot project that utilizes used batteries from its own EV models in building an ESS that is powered by solar energy.