Posco, KIST and RIST to turn ammonia into hydrogen

Posco, KIST and RIST to turn ammonia into hydrogen 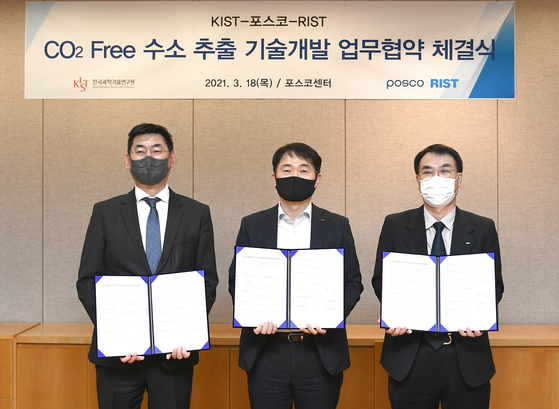 Officials from Posco, the Korea Institute of Science and Technology (KIST) and the Research Institute of Industrial Science & Technology (RIST) sign an agreement to collaborate on mass producing hydrogen from ammonia at the steelmaker's Seoul office in Gangnam, southern Seoul, on Thursday. [POSCO]

The company signed an agreement with the Korea Institute of Science and Technology (KIST) and the Research Institute of Industrial Science & Technology (RIST) on Thursday, to collaborate on the task.

According to Posco, the technology can come in handy for transporting hydrogen. Ammonia, which is chemically composed of hydrogen and nitrogen, is much easier to liquefy than hydrogen and thus can be used as a transporting agent.

But to realize this, technology is required to turn hydrogen into ammonia for transportation and turn it back to hydrogen to use as fuel. While technology for the former exists, the latter is underdeveloped — which is why Posco has teamed up with the research institutes.

For its ammonia supply, the steelmaker has signed a contract with Australia’s Origin Energy this month. Posco has been focusing on hydrogen as its next growth engine. It aims to complete the entire value chain from producing hydrogen to establishing infrastructure for its storage and supply.