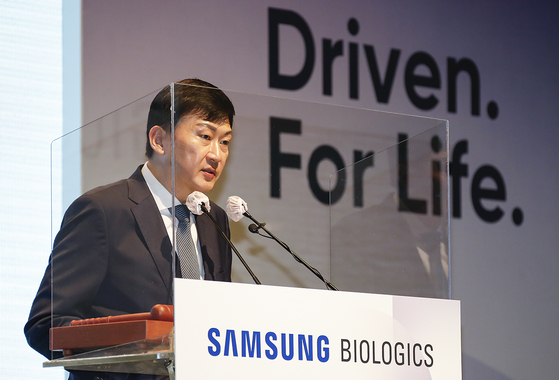 
Samsung Biologics will accelerate the expansion of its contract development and manufacturing organization (CDMO) business, the pharmaceutical company said Friday during its 10th general shareholder meeting held in Songdo, Incheon.

With about 100 shareholders participating online and offline, it was the first general shareholder meeting with John Rim as CEO. Rim was appointed as the top executive of the company late last year.

Two items on the agenda were passed, including the approval of audited financial statements and adjustment of the director remuneration limit from the previous year’s 11 billion won ($9.73 million) to 15 billion won.

The company employed an electric voting system for the first time, the voting conducted between March 9 and March 18 via the Korea Securities Depository website.

“We signed 56 contract manufacturing organization [CMO] deals in 2020, and that's up by 20 compared to the previous year," said Rim. "The company posted 1.16 trillion won in revenue and 293 billion won of operating profit last year, which are 66 percent and 219 percent jumps from the previous year.”

The company’s three factories have been fully operating and a fourth plant in Songdo, which is currently under construction, is expected to begin operation by the beginning of 2023.

The fourth plant will have an annual capacity of 256,000 liters (67,628 gallons), which Samsung says is the highest figure for a single bio production plant in the world.

"We aim to expand the current CDMO business, which is now centered on antibody therapies, further to new drug development businesses such as cell therapies, gene therapies and vaccines," Rim said. “On top of the R&D center in San Francisco, we are planning to expand our CMO and CDO services to key foreign countries.”

"In 2021, Samsung Biologics will prepare to leap forward as a global and all-round biotechnology company," Rim added. "Based on the sense of duty and pride that we protect human life, Samsung Biologics will do its best to grow as a healthy and transparent company with sustainable management by expanding our investments in ESG initiatives.”