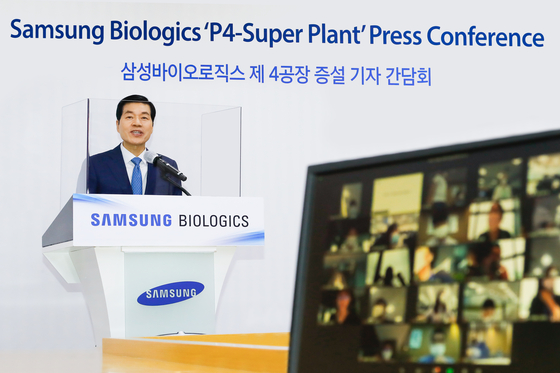 This will be the company’s fourth plant, all in Incheon's Songdo District. The factory will have an annual capacity of 256,000 liters (67,628 gallons), which Samsung claims is the highest figure for a single bio production plant in the world.

An aging global population is driving research by bio pharmaceutical companies on illnesses like cancer, autoimmune disorders and diseases like Alzheimer’s and Parkinson’s.

According to Kim, the bio pharmaceutical market in the past decade grew at an average annual rate of 8 percent. The market for contract manufacturing has been growing at 16 percent.

The Covid-19 crisis will accelerate demand in the future, Kim said.

“We’re seeing a paradigm shift in the market — global bio companies in the past mainly produced from their own manufacturing facilities,” Kim said during an online press conference aired live from Samsung Biologics’ Songdo headquarters on Tuesday. "But after the Covid-19 outbreak, they’re rapidly increasing dependence on contract manufacturing to ensure stable research and development [R&D] and supplies."

Construction on the new facility is scheduled to start as early as September. The goal is to partially start production by the end of 2022. Kim forecast the entire process — including the verification of production facilities and obtaining of government permits — to take 36 months. The completion date suggested in Samsung Biologics’ public announcement was August 2023.

Once completed, the fourth plant will bring Samsung Biologics’ annual production capacity to 620,000 liters, which the company says is equivalent to nearly 30 percent of the global contract manufacturing market for bio pharmaceuticals.

Samsung Biologics also disclosed plans to purchase land of more than 330,000 square meters (3.552 million square feet) inside Songdo’s bio cluster. It will be used for a second Songdo campus and an open innovation R&D center, where Samsung Biologics will work with bio ventures.

Having built up its business on contract manufacturing, the company is increasingly working with clients to develop and test products before the commercialization stage.

The fourth factory will be a “one-stop” facility, Kim said, to have equipment required for all three business segments: developing cells, conducting clinical trials and commercial production.

Including the factory and purchase of new land in Songdo, the investments announced Tuesday surpass 2 trillion won. This is substantial considering the company's total investment in facilities and R&D in its nine year history is 4 trillion won.

As for financing, the chief executive expressed confidence that the company will be able to source funds from its own profits, unlike for the previous three factories. The company went into the black for the first time in 2017 and the second quarter of 2020 saw a net profit of 52 billion won, up 153 percent on year.

“Our current cash reserves total 860 billion won," Kim said. "We’re also expecting a stable inflow of annual profits for a while, from which most of the funds will be sourced. The company has a high credit rating at the moment and low debt ratio so securing loans wouldn’t be difficult either."