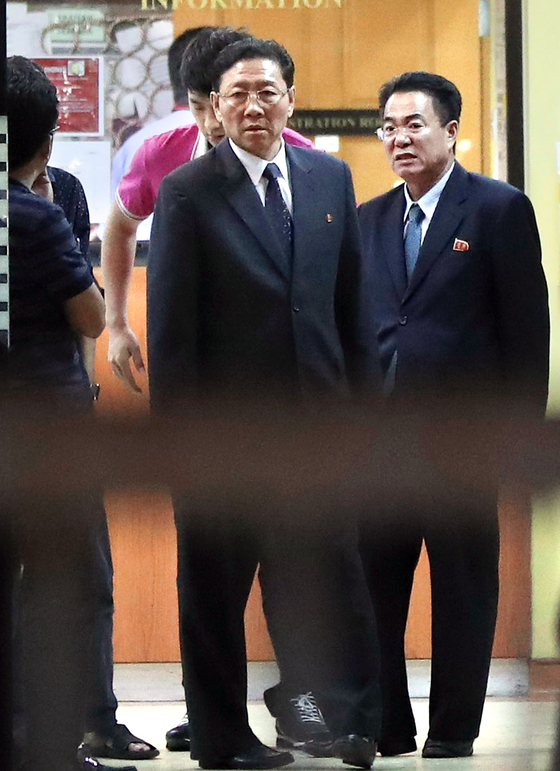 Former North Korean Ambassador to Malaysia Kang Chol, center, stands at the entrance of the forensic department at a hospital in Kuala Lumpur, Malaysia on Feb. 15, 2017. [AP/VINCENT THIAN/JOONGANG ILBO]


North Korea has cut all ties with Malaysia after the Southeast Asian country extradited a North Korean citizen to the United States to be investigated for money laundering charges.

“On March 17, the Malaysian authority committed an unpardonable crime, in the end, of forcibly delivering the innocent citizen of the DPRK [Democratic People’s Republic of Korea] to the United States by having charged him with ‘criminal,’” reads a statement from North Korea’s Foreign Ministry, released by the North’s state-run Korean Central News Agency (KCNA) on Friday.

“With regard to the grave situation that has prevailed, the Ministry of Foreign Affairs of the DPRK hereby announces total severance of the diplomatic relations with Malaysia which committed super-large hostile act against the DPRK in subservience to the U.S. pressure.”

Malaysia extradited Mun Chol-myong, a businessman, who is accused by the United States of transporting prohibited luxury items from Singapore to Pyongyang and laundering funds through shell companies in violation of United Nations sanctions. According to the North’s foreign ministry, Mun was arrested in Malaysia two years ago.

Last week, Malaysia's top court ruled that he be extradited to Washington, rejecting his appeal challenging the extradition request from the United States.

The North’s foreign ministry claimed Mun was “engaged for years in the legitimate external trade activities in Singapore” and called the Malaysian court’s decision “an undisguised alignment with and direct engagement in the anti-DPRK hostile maneuvers of the United States.”

Malaysia and North Korea’s diplomatic ties have been strained since North Korean leader Kim Jong-un’s half brother Kim Jong-nam was murdered at a Malaysian airport in early 2017.

Malaysia closed its embassy in Pyongyang following the incident and expelled the North Korean ambassador from Kuala Lumpur.

Countries including Spain, Kuwait, Peru and Mexico expelled North Korean ambassadors in response to the test, while Egypt and Uganda cut military ties with Pyongyang and the Philippines suspended trade relations to comply with UN sanctions.

In 2019, Choe Ryong-hae, the nominal No. 2 figure in the North Korean regime, met with then-Malaysian Prime Minister Mahathir Mohamad in Azerbaijan and discussed ways to normalize relations, but little progress was made amid the global outbreak of the coronavirus.