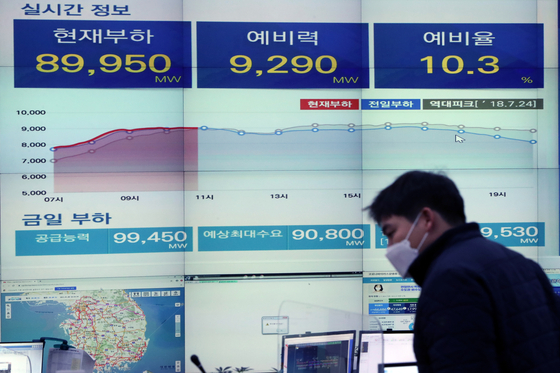 Power consumption appearing on a monitor at Kepco's headquarters in Naju, South Jeolla on Jan.8. [YONHAP]


Electricity bills will be unchanged in the second quarter despite the fast rise in the international price of crude oil.

The Moon Jae-in administration has been under pressure as inflation hits households, especially with food prices rising, and is in an especially tough spot ahead of mayoral elections in Seoul and Busan.

Korea Electric Power Corp. (Kepco), the sole power distributor, said Monday that electricity bills with be discounted at the rate of 3 won per kilowatt hour, the same as in the first quarter.

The government estimates that a family of four consuming 350 kilowatt hours of electricity every month through June will be able to save 1,050 won on their electricity bill each month. They will receive a bill of 54,000 won.

This is the second electricity billing notification the government has made since changing the system for the first time since 2013 to incorporate the changing international fuel prices quarterly.

The previous billing system only incorporated the annual average international fuel price of the previous year.

The government was expected to increase power bills in the second quarter as international crude prices have been rising.

According to the government, Brent crude was up 9.6 percent in February from January, liquefied natural gas surged 29 percent, while bituminous coal was up 4.6 percent.

If the changed energy prices were properly reflected, the discount should have been 0.2 won per kilowatt hour in the second quarter, according to the government.

The situation was the opposite in the first quarter, when the government declined to give as much of a discount as it could have.

Considering the drop in crude prices, the discount should have been 10.5 won per kilowatt hour.

The state-owned power company said in a statement that it was ordered by the government not to raise electricity bills in the second quarter despite the increase in international crude prices on grounds that the LNG price spike was due to the unusually cold weather and therefore does not need to immediately incorporated into the new power bill calculation.

The government told Kepco not to raise the bill citing the needs to stabilize the lives of the public, who are facing difficulties due to the Covid-19 pandemic.

When announcing its newly changed billing system, the Ministry of Trade, Industry and Energy noted that the minister could prevent Kepco from raising the energy bill in cases of emergency.

The news of the suspended increase comes at a time when there has been growing pressure on the government over inflation.

Korea’s consumer prices last month rose 1.1 percent compared to the year earlier period, the sharpest increase in a year. Food prices have been rising at a much faster rate.

Increasing electricity bills as households are stressed is expected to add to the public’s frustration with the current administration, which is losing popularity.

Noting the changes in public support, the government has recently emphasized its efforts to support households.

“By managing public bills in the second quarter, we will try to minimize the impact of the rising international crude prices on consumer prices,” Vice Finance Minister Kim Young-beom said Friday.