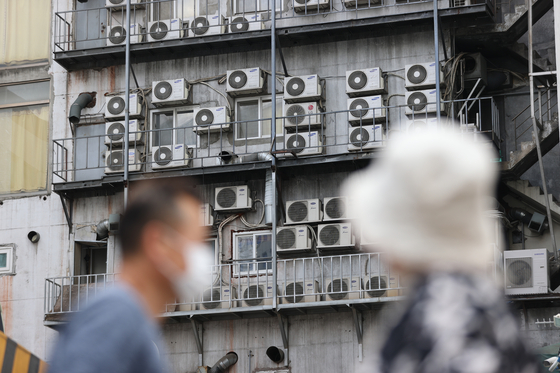 Air conditioners on the side of a building in Seoul oon Monday. With rising heat, energy consumption is expected to rise with more people turning on the cooling system. Yet the government has decide to freeze the energy bill in the third quarter worrying rising inflation impact on household amid Covid-19. [YONHAP]

This is the second consecutive quarter since the billing system was changed to allow greater flexibility, but bills won't be raised yet.

According to the Korea Electric Power Corp. (Kepco) on Monday, the Ministry of Trade, Industry and Energy told the power distributor not to raise energy prices in the third quarter for the sake of households who have suffered during the Covid-19 pandemic and to avoid fueling inflation.

The government said it will review the possibility of raising electric bills in the last three months of the year if oil prices continue to rise.


Under the new billing system, Kepco was suppose to raise rates for all types of uses by 3 won per kilowatt hour, the maximum increase allowed per quarter, in the third quarter.

A family of four consuming 350 kilowatt hours would have been billed an additional 1,050 won per month, a 1.94 percent increase.

International fuel prices have been rising rapidly since April due to expectations of an economic recovery.

According to Kepco, the price of bituminous coal after tax between March and May this year averaged 133.65 won per kilogram. That’s 17.6 percent higher than the 113.61 won average between December and February.

LNG prices between March and May dropped 3.6 percent to 490.85 won per kilogram compared to the previous three months.

There is speculation that crude prices could reach $100 per barrel for the first time in seven years.

In 2018, Kepco reported an operating loss of 208 billion won, its first loss in six years. In 2017 the company recorded an operating profit of 4.9 trillion won. In 2019, its loss grew to 1.28 trillion won as the government kept the power company from raising electric bills.

Last year the company was able to report an operating profit of 4.09 trillion won thanks to cost cuts resulting from lower international crude prices.

That profitability continued in the first quarter of this year before international prices started to surge.

Kepco while saw a 0.1 percent dip year-on-year in revenue the first quarter of this year, operating profit increased 32.7 percent in the  period.

The government is phasing out of nuclear energy, which tends to be cheap, and replacing it with renewable energy including LNG with higher unit costs. That is also chipping away at Kepco's profits.