With LG Electronics still yet to announce what it plans to do with its money-losing smartphone business, rumors are circulating that it may choose to completely shut it down rather than sell it.

LG Electronics CEO Kwon Bong-seok admitted in January that the company is reviewing what to do with its smartphone business, while “leaving all possibilities to determine the future direction of its mobile communication division."

The final decision on exactly what that entails is expected to come during the company’s board meeting scheduled to be held on April 5.

LG Electronics basically has three options: Shut down, sell or downsize. Until recently, selling seemed the most likely scenario.

Many foreign companies including Google, Facebook and Vietnamese conglomerate Vingroup were mentioned as possible buyers of the business, according to multiple local media outlets.

But no progress has been made.

“Mergers and acquisition [M&A] must be proceeded secretly by very few people," said a source from the industry who requested anonymity. "But as LG already admitted it was considering quitting the business, it would have been quite difficult for the company to proceed with an M&A."

According to an unnamed source with knowledge of the matter speaking to the JoongAng Ilbo, LG Electronics now seems more likely to shut down the business rather than choosing to sell it.

The electronics maker refused to comment on the rumor on Monday. 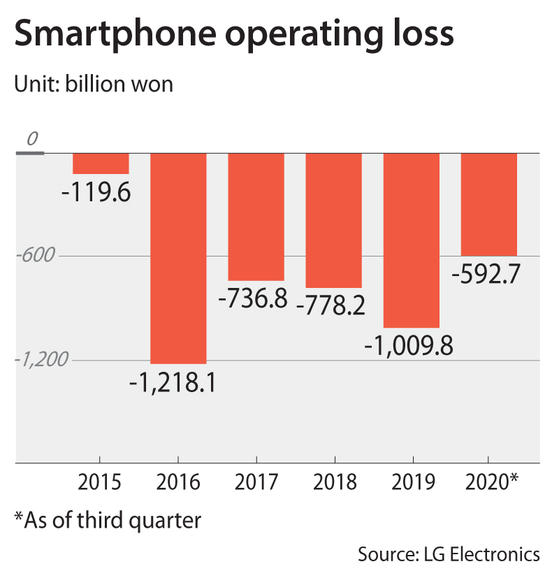 Partly shutting down the business could be a possible scenario.

In that case, LG Electronics may still launch its highly-anticipated rollable smartphones. The electronics maker released a short five-second video teasing the rollable smartphone under the name LG Rollable at the Consumer Electronics Show (CES) 2021 in January. Foreign media outlets and IT companies praised the phone, saying the form factor could be better than a foldable device.

But with questions raised over the business, it is unclear whether the company will be able to turn a profit through the rollable phones. The market for foldable smartphones was only some $1 billion as of last year, according to data by Display Supply Chain Consultants.

If LG Electronics does decide to shut down its smartphone business, the company will move some 3,700 employees to other areas of the business.

“The shut down [of the smartphone business] could work as a chance to resolve the company’s concerns over the chronic deficit and future uncertainties,” said Kim Dong-won, a KB Securities analyst. “As it has no concerns of losing its talent by rearranging personnel, [the shut down] could increase the value of the company.”

LG's smartphone division has posted losses for 23 consecutive quarters, which means it hasn't made a profit since the second quarter of 2015.

Whatever LG’s decision is, it's bound to shake up the local smartphone market.

LG Electronics accounts for some 13 percent of Korea's smartphone market. If LG completely exits the market, the two big players — Samsung Electronics and Apple — will likely divide its share between them.

Apple, which last month opened its second store in Yeouido, western Seoul, is working hard to pull in more Korean customers. But market experts say LG smartphone users are likely to move to Samsung as both work on the Android operating system and offer devices at a lower cost.