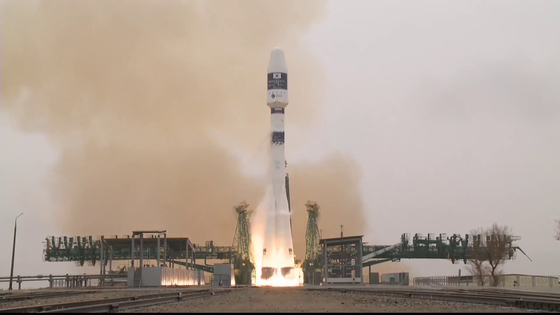 Korea's CAS500-1 satellite takes off in Russia’s Soyuz 2.1a launcher from Baikonur Cosmodrome, Kazakhstan, on Monday. [MINISTRY OF SCIENCE AND ICT]

Korea launched a 500-kilogram Compact Advanced Satellite into the atmosphere Monday, the first of five in a government plan to transfer satellite technology to private firms.

The CAS500-1 model was one of 38 satellites carried into space by Russia’s Soyuz 2.1a launcher, which took off from the Baikonur Cosmodrome in Kazakhstan at 3 p.m.

After safely being deposited in its orbit 497.8 kilometers above the ground, CAS500-1 made first contact with the Svalbard Satellite Station in Norway at around 5 p.m.

“Through exchanged signals, we have confirmed that CAS500-1 is in a stable condition,” said the Ministry of Science and ICT, on Monday afternoon.

If all goes well, CAS500-1 will make its first contact Monday night with the Korea Aerospace Research Institute (KARI)’s ground station in Daejeon.

The lift-off, originally slated for Saturday afternoon, was postponed due to technical problems in the Russian rocket’s ground equipment that supports take-offs, according to the Science Ministry.

Measuring 1.4 meters in width and 2.89 meters in height, CAS500-1 is an observational satellite that will send videos for various purposes, from creating maps to observing wildfires.

For the next six months, CAS500-1 will conduct a trial run to test connectivity. It officially goes on duty in October. Its mission will last for four years.

The successful launch of a CAS500 model is an important milestone for Korea’s aerospace industry, in which a score of private companies are hoping to do business in a market previously dominated by the government.

Developed by the state-owned KARI, the CAS500 comes with a “standard platform,” which means a large part of it can be adapted to develop other satellites with minimum modification, instead of designing a whole new model from scratch.

A satellite is largely composed of two parts: the body, which takes charge of locating it in outer space, and the payload, which contains equipment that decides its function -- like observation or telecommunication.

KARI’s standard platform will provide the satellite’s body, which means private companies only have to develop payloads.

The CAS500 project will produce five 500-kilogram satellites in a series. In developing the first, KARI worked with the private company Korea Aerospace Industries (KAI).

More than 60 companies took part in developing the first CAS500 satellite, which enabled 91.3 percent of its core parts to be Korea-made. Its development period was six years.

For the second CAS500, slated for launch next January, KAI will take charge of the entire process from designing the satellite to launching it.

The last three satellites in the series will be developed in a way to establish a mass production system using CAS500’s standard platform technology. No. 3 and 4 are planned for launch in 2023, while the fifth is scheduled for 2025, KAI said.