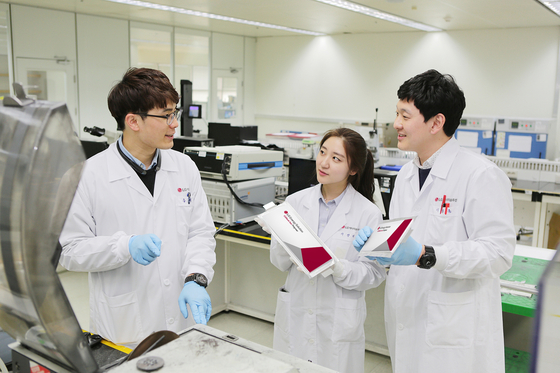 LG Energy Solution, a leading battery maker in Korea, remains a frontrunner in the industry with its technological prowess accumulated over the past 30 years.

LG Energy Solution holds a total of 23,610 patents across the globe, a vast lead over other competitors. The company’s global competence is attributed to its generous investments in research and development (R&D) with more than 2,500 employees in the R&D unit. Over the last decade, LG Energy Solution has allocated some 5.3 trillion won ($4.7 billion) to R&D.

In 2007, LG Energy Solution produced the world’s first NCM 523 battery that contains cathode materials of nickel, cobalt and manganese at a 5:2:3 ratio and introduced the first NCM 622 battery in 2016.

LG Energy Solution plans to present a high-nickel NCMA — nickel, cobalt, manganese and aluminum-based — battery this year, which excels in capacity, durability and resistance and even supports quick charging. Nickel accounts for 90 percent of NCMA batteries, while cobalt takes up less than five percent.

In 2019, LG Energy Solution became the first company to produce a battery that takes only twenty minutes to charge up to 80 percent, incorporating silicon with anode materials.

LG Energy Solution produces its batteries by stacking mono-cells consisting of cathode, anode and separator and putting a half-cell that has only anode and separator on top of the stack. This manufacturing method is called ‘lamination and stacking,’ and is used for making batteries less than 2mm-thick with higher energy density and better durability.

Moreover, LG Energy Solution developed safety reinforced separator (SRS) technology in 2004, improving both safety and performance of the product by coating its surface of separator with a thin layer of ceramic materials. Some 800 SRS patents are held in Korea and around the globe.

Technological breakthroughs come from tremendous effort and investment. Considering reverse engineering is impossible in batteries, technological protection is of utmost importance in the industry. Therefore LG Energy Solution uses the ‘black box’ strategy to ensure security by protecting the core technology as a trade secret.

LG Energy Solution is the only battery maker that has established a global production system that connects Korea, the U.S., China and Europe. The company plans to double the production capacity by 2023.