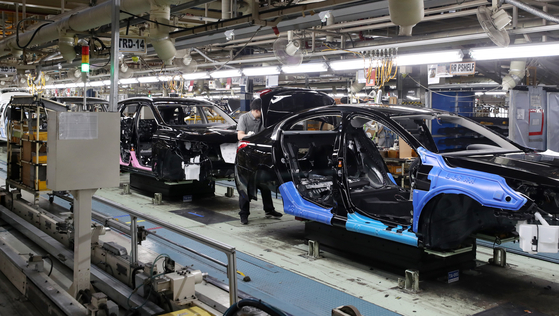 A production line at an automotive company in Korea. Under a legislative amendment, the period over which the 52-hour workweek will be calculated has been extended to six months. The change is expected to help companies, especially SMEs. [YONHAP]


The 52-hour workweek is set to become more flexible after the cabinet accepted an amendment passed late last year by the National Assembly.

Once the president signs, it will become law.

Under the terms of the bill, weekly hours will be averaged out over six months rather than three months. The one stipulation is that workers get at least 11 hours off between shifts.

Business owners will face administrative penalties if they use the flexible working schedules to save money.

On Tuesday, the cabinet voted on the amendment, which is scheduled to be effective April 6. In Korea, the executive branch can kick a bill back to the National Assembly with suggestions.

Rescheduled working hours have to be negotiated between management and labor.

Until now, companies were allowed to reschedule work schedules of its employees so that the average is 52 hours over a three-month period. That limit has been extended to six months, allowing companies to more easily adjust schedules.

Starting July, the 52-hour workweek, which was first adopted in July 2018, will be extended to smaller businesses with between five and 50 employees.

Those that fails to meet the working-hour regulations face prison terms of up to two years and fine up to 20 million won.

Smaller businesses have complained that the restrictive working hours not only affect the productivity of their businesses but also increases their costs as they have to hire additional workers during peak seasons, where production lines have to run 24 hours to meet demand.

Unions have been opposing the flexible working hour amendment, citing the risk to health of excess working hours.

To meet the demand from the unions, businesses that adopt the extended flexible hours have to guarantee a break of 11 hours straight for the employees.


The only exception to the 11-hour rule is natural disasters or accidents.

Those that adopt the more extensive flexible working hours have to report to the Labor Ministry on the plan.

Those that fail to do so will get be fined between 800,000 won and 3 million won, depending on the frequency of the offense.

Off guard for three hours