Depopulation continues as January births down on year

Depopulation continues as January births down on year 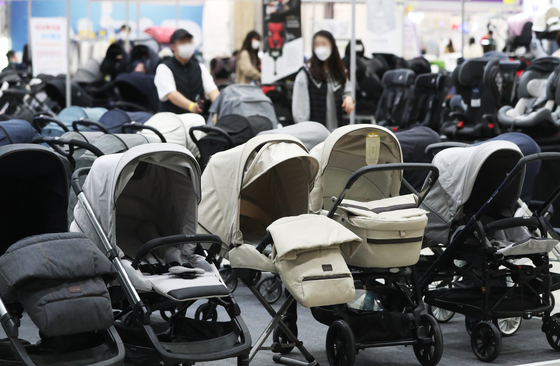 Baby strollers on display during an exhibition held in Suwon in November 2020. [YONHAP]


Births in January were up on month but down on year, adding another data point to Korea’s depopulation saga.

Natural population has been declining for 15 consecutive months, and last year for the first time the country recorded an annual natural population fall, in which more people passed away than were born.

This year, the trend is expected to continue, especially as the country is experiencing an acceleration in aging.

According to Statistics Korea on Wednesday, the number of babies born in January recovered back above 20,000 after falling to a record low of 19,576 in December last year. When compared to the year earlier period, it was down 6.3 percent to 25,003.

The pandemic was believed to have been one of the key factors in the low number of newborns.

“Last year, many couples are believed to have postponed their plans to have children due to the coronavirus,” said Kim Su-young, head of the Statistics Korea’s population census division.

The number of people who passed away in January declined 4.3 percent to 27,181 compared to the same month in 2020. When compared to the previous month, it increased 1 percent from 26,899.

As a result, the natural population declined 2,178.

The number of people passing away outnumbering newborns from November 2019 and through 2020.

It was the smallest number of newborns recorded since data was first compiled in 1970.

As a result, the natural population decline, which is the difference between births and deaths, totaled 33,000.

The statistics agency report said fewer people are getting married, continuing a trend.

The number of people married in January plummeted 18 percent year-on-year to 16,280.

A recent study by the statistics agency found that Covid-19 has been a factor in reducing the number of marriages. The social restrictions implemented in containing the virus forced many couples to postpone their weddings.