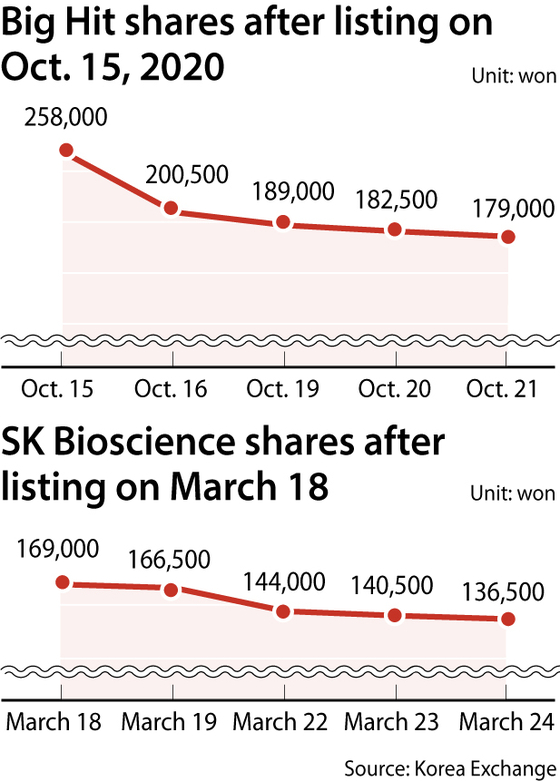 SK Bioscience dropped for a fourth consecutive day Wednesday as investors sour on new listings that have failed to live up to expectations.

The vaccine maker is now down 28 percent from its 190,000-won peak, and more than 2.5 trillion won ($2.2 billion) of market capitalization has been lost since last Thursday.

Shares of the Covid-19 vaccine maker closed at 136,500 won Wednesday, down 2.85 percent from the previous trading day.

SK Bioscience is just the latest in a series of flops, and punters are increasingly worried that they will continue to lose money on public offerings that have failed to live up to expectations.

For Big Hit, the overvalued initial public offering price, set at 135,000 won, has been cited as one of major reasons behind the fall after listing.

The company is also dependent very much on one group, BTS, which could go from an asset to a liability at some point in the future if competition heats up and fan fatigue sets in.

For SK Bioscience, analysts say investors need to take time to see the real value of its shares.

The short term changes in its stock prices, driven largely by investors cashing in, could be followed by continued falls or rises depending on the results of the company's progress with its own Covid-19 vaccines, said Han Byung-hwa, an analyst from Eugene Investment & Securities in a phone call with the Korea JoongAng Daily on Wednesday.

“We can't say the current share price is low considering it's still above the company’s starting price, bringing its market cap to over 10 trillion won," Han said, adding that if the company successfully commercializes its own Covid-19 vaccines next year, its valuation could be on par with global vaccine makers and valued at over 16 trillion won.

The company has two vaccine candidates of its own currently undergoing clinical trials.

Han also said the recent fall in shares is not much related to the news about blood clots developing in people recently vaccinated with AstraZeneca's Covid-19 vaccine, especially as most countries resumed using the vaccine after the European Medicines Agency declared last week that it is safe and effective.

SK Bioscience is a contract manufacturer of AstraZeneca and Novavax Covid-19 vaccines.