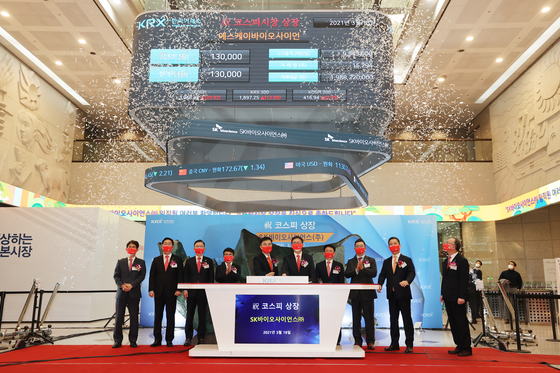 SK Bioscience made a hot debut on the local stock market Thursday, soaring to its maximum trading ceiling of 169,000 won ($150) just two minutes after the market’s opening.

The company started trading on the country’s main bourse at a starting price of 130,000 won, double the subscription price of 65,000 won and also the highest possible starting price set based on a spread of bid and ask prices before the market opened Thursday.

The Covid-19 vaccine maker’s share price did not fall during intraday trading, as buy orders for more than 6.3 million shares were pending at a bid price of 169,000 won at the market’s close on Thursday. Roughly 876,000 shares worth 147.4 billion won were traded during the day.

That's good news to the vaccine makers’ employees. Some 19.57 percent of publicly offered stock, or 4,490,400 shares, were allotted to an employee stock ownership association for subscription, and some 600 employees participated. This means each employee subscribed to an average of 7,400 shares.

The association cannot sell its holdings for a year.

One question is whether any employees will be tempted to quit the company -- at which point they are able to redeem the shares from the association and sell them. In the case of SK Biopharmaceuticals listing last July, its share price hit daily gain ceilings for three trading days in a row. A lot of employees quit to cash in.

Stock gains are expected to continue for SK Bioscience.

The company has inked consignment manufacturing deals for Covid-19 vaccines developed by AstraZeneca and Novavax.

It is also working on two Covid-19 vaccine candidates of its own.

“We expect SK Bioscience’s share price could [continue to] move upwards as there are many upcoming events such as when it announces the clinical trial results of its own vaccines,” said Kim Ji-ha, a research fellow at Meritz Securities. “Also it is likely to be included in the Kospi 200 index if it maintains its market capitalization above 5 trillion won.”