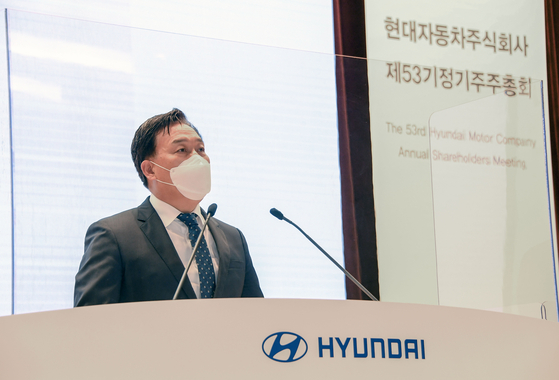 The move is intended to comply with a new law that comes into effect next year which requires that company boards have at least one male and female member.

Hyundai Motor's shareholder meeting on Wednesday was aired online for the first time in the company's history. Around 150 investors attended the offline event held in Hyundai's headquarters in Yangjae, southern Seoul.

Hyundai once sold up to nearly 1.8 million cars per year in China, but has struggled since 2017 after Korea's deployment of the U.S.-led Terminal High Altitude Area Defense (Thaad).

2021 is an important year for the automaker's future business. The Ioniq 5, the first electric vehicle (EV) to be manufactured on Hyundai's E-GMP modular platform, is slated for release this year in Korea, Europe and the United States.

It is the first of 12 EV models Hyundai has pledged to introduce by 2025.

Ha said he anticipates tough management conditions this year, as concerns surrounding the coronavirus pandemic and its impact on the global economy persists.

"As environmental regulations are tightened worldwide, the competition for electric vehicles will intensify," he said during the Wednesday meeting.

"Demand will continue to be concentrated in several classes and so will the [contactless] consumption pattern. How we respond to these changes will decide our fate in the vehicle industry in the long term."

Despite temporary production halts and a drop in demand due to the pandemic, Hyundai Motor managed to increase its global market share to 5.3 percent, Ha added. The slump in global sales was partly offset by domestic performance.

Hyundai Motor Group's former chairman Chung Mong-koo also stepped down from his last remaining official position in the group on Wednesday. He was a board member at auto parts maker Hyundai Mobis, a seat that has now been filled by Ko Young-suk, vice president and head of Hyundai Mobis' R&D strategic planning division.

His son Euisun Chung took over as the group's chairman in October last year.