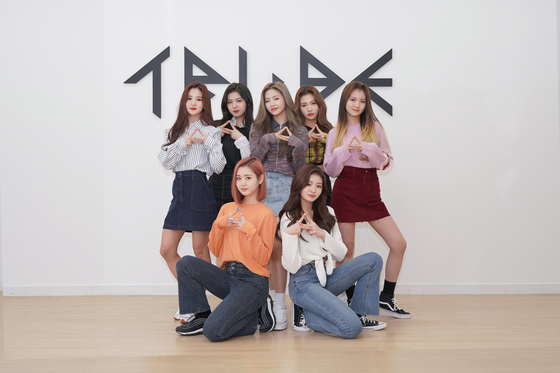 Girl group TRI.BE poses for photos after an interview with the Korea JoongAng Daily in their dance studio in southern Seoul. [JEON TAE-GYU]


Newly-debuting K-pop groups are aplenty, but there’s one aspect that makes newly-debuted girl group TRI.BE stand out from the rest — it is the first K-pop band to be put together by the world’s biggest music company Universal Music and Korea’s esteemed music producer Sinsadong Tiger.

TRI.BE, pronounced try-be, debuted last month with the EP “TRI.BE DA Loca” and is actively appearing on television music programs and YouTube videos, to make it known that there's a new rookie in town. The band’s lead dance track “Doom Doom Ta” has been streamed over a million times in its fourth week of release on Spotify, a rare feat for a debut release. The seven members — leader Songsun, Kelly, Jinha, Hyunbin, Jia, Soeun and Mire — say that while they can hardly believe they have debuted, they believe that in five years from now, they will have made it big.

“This year, our goal is to win at a television music program and get a rookie of the year award,” said Jia, when asked what TRI.BE’s aims were for this year. When asked where the members saw themselves in five years, Songsun confidently said, “Succeeding big time.” 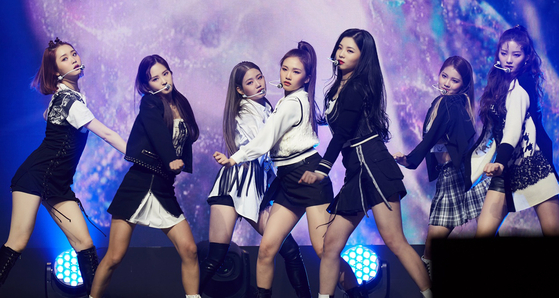 
“Doom Doom Ta” is a powerful dance number with the message of “living independently without caring about what others think,” written by Sinsadong Tiger with the help of member LE from girl group EXID. LE also helped with producing the music and the group itself. The upbeat track will have listeners tapping their feet along to the rhythm. There’s also a special secret hidden within the song that's symbolic of TRI.BE’s unique identity.

“If you listen carefully to ‘Doom Doom Ta,’ you will learn that the melody to everyone’s parts are all different and makes the best of all our different vocal styles,” said Songsun.

Hyunbin described the band as “seven different colors of seven different people coming together,” and said, “We try to show our different charms without conforming to one rule. We stick to the overall concept but each of us makes the best use of our own vibe and vocal tones, and all those different colors come together to make something totally unique.”

The uniqueness of the group is also visible in the members’ diversity, not only in style, but nationality and age. Three members are from outside of Korea — Japan and Taiwan — while the ages of the members span from 15 to 24. It’s become more or less customary for K-pop bands to include members of different nationalities, but it’s rare for a group to have such a wide range of ages. But leader Songsun, the oldest of the group, believes that TRI.BE is all the better for it. 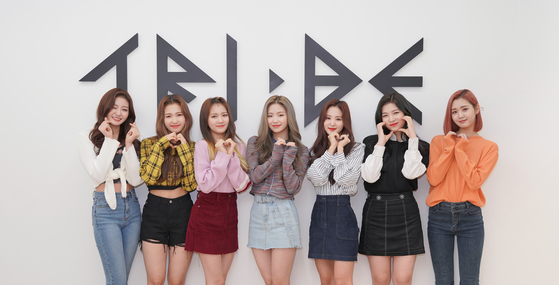 Girl group TRI.BE poses for photos after an interview with the Korea JoongAng Daily in their dance studio in southern Seoul. [JEON TAE-GYU]


“It makes us special,” she said. “Everyone apart from me was born in the 2000s. I don’t think there’s a group out there that’s like us, but I take pride in that and I try more so that I don’t fall behind others. I think it gives us a competitive edge when it comes to approaching the public. I believe we have potential.”

Debuting is meaningful for any artist, who usually spends years working toward this goal, but it was more than that for Songsun. Widely known as the cousin of Yuri of Girls’ Generation, Songsun spent nine years as a trainee. She came close to debuting on 10 separate occasions, but none came to fruition. She spent years being the youngest in groups, that was until, she joined TRI.BE.

“It was hard,” she said. “I was so close to debut, but it kept getting canceled. There were so many times I wanted to give up, but in the end, there was always this feeling that this was all I wanted. So I held on. I still can’t believe it. Having debuted means that people know me. I’m just so happy.”

The other members also trained for an average of two years each, jumping through hoops and over hurdles to make it to the end. A K-pop agency typically has a pool of multiple trainees at first, then eliminates them one by one depending on monthly tests that judge vocals, dancing and other scores, including their weight. The members say the hardest part was to see the elimination process happen right in front of their eyes and “the sense of terror that it could also happen to me,” according to Hyunbin. 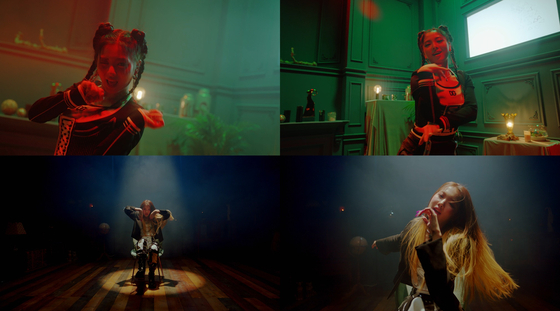 
“It was mentally hard on us to see trainees that we’ve been working together with leave due to their own circumstances or because of the monthly tests. It was difficult because we went through the same ordeal but they were gone. It felt like I couldn’t depend on anyone else. It was hard. But I’m happy that the members [of TRI.BE] all did well and made it through to the end.”

The final seven members were selected in 2020 and were given four months to live and practice together. The band again credits the age range with bringing them closer and helping them to get along. Songsun takes charge of sitting everyone down and asking one by one if they would like to share anything, creating an opportunity for the members to open up to each other.

“We’re all young, so we’re quite open about expressing ourselves and saying what we like and what we don’t like,” said Hyunbin. “But then also, because this is our job and this is a profession, there are times when we can’t fully say what we want to. Those kinds of things build up and it shows from the way we act. We learn from that and I think we’re growing more respectful of each other.” 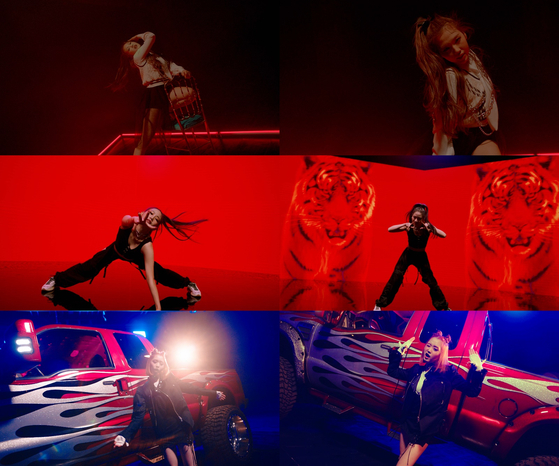 
TRI.BE signed with U.S. music label Republic Records immediately after debut, marking the first time a K-pop act has signed with an overseas label upon its debut. With the backing of a major music company, TRI.BE is seeing growing popularity worldwide, perhaps more so than in Korea. The international attention is the very reason why members Mire, Jia and Kelly have been dreaming of becoming K-pop stars since they were children.

They watched the performances of famous K-pop acts such as SHINee, Girls’ Generation and Blackpink and wished that one day they would perform on stage just like them. But the non-Korean members also had to deal with some extra difficulties, such as the language barrier and not being able to see their family or friends from back home.

While the members have achieved their goal at a young age, it also means that they’ve been deprived of the chance to live ordinary lives of teenage girls. Mire graduated from her Japanese middle school this winter, but could not go to Japan to attend the graduation ceremony so her friends took a picture with a photograph printed with Mire’s face. It brought her to tears and she envied them for a moment, then she saw the members around her. 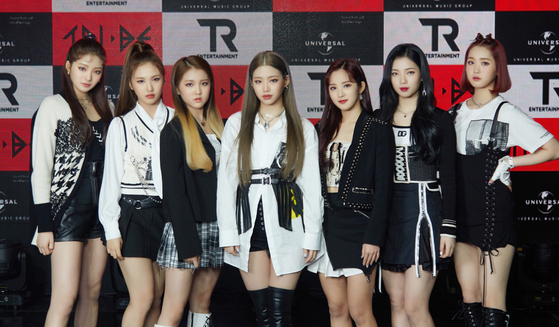 
“I have such funny and nice members around me,” said Mire. “I have achieved my dream so I don’t regret any of it.”

Soeun added, “I usually just attend morning classes and leave school early to come and practice. When my friends talk about something I don’t know or when I come to school and find that I’m seated at the back of the class, I feel really upset. It feels sad to be distant from friends that I used to be really close with. But it’s just a fleeting moment. I can’t go to school, but I have the members. They’re all I’ve got.”

As a rookie band, TRI.BE doesn’t have an official fan club yet. Since their name is a portmanteau of “triangle,” which they consider to be the perfect shape, and “being,” member Jinha suggested the name Triangle would be a good fit for the fan club.

“Triangle is the perfect shape, and it would mean that the fans are perfect,” she said. “I’m rooting for it because I think it’ll be the best fit.”

“We haven’t met the fans in person because of the coronavirus, but I feel so overwhelmed with love when fans tell us that they love us on video phone calls,” said Hyunbin. “It makes me think that I should always give my best because there are fans out there who really love me. The day we get to meet them in person will be the day that we will really feel like we’ve debuted.”