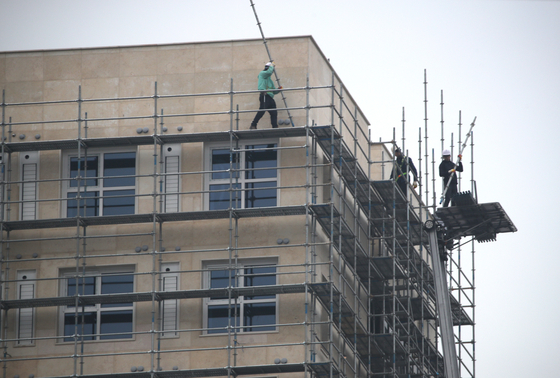 Workers work without safety harnesses at a construction site in Seoul in February. [YONHAP]


Last week, a 60 year-old fell three stories to his death while working at a construction site in Gangseo, Seoul. His body was found by his son, who heard his father scream while falling.

The government on Thursday released measures to prevent fatal accidents, especially at construction sites, which have become prevalent despite promises made every time a major accident happens.

According to the Employment and Labor Ministry and the Land, Infrastructure and Transport Ministry, the government will be providing free technical guidance and safety facility support to small construction projects costing 100 million won ($88,000) or less.

Mid-size whose projects valued between 100 million won and 10 billion won will receive safety guidance from an institution specializing in construction safety programs.

If the institution fails to properly provide safety management guidance, its own business will be suspended.

Large construction companies with projects costing more than 10 billion won or ranking within the top 200 companies in the country will be handled by the company itself.

At construction sites, 56.7 percent were accidents caused by workers falling. At production plants, 48.8 percent of the deaths were from falls or being crushed between machinery.

The government noted that such accidents mostly happened at small construction sites. The death of workers at construction sites whose projects costs less than 5 billion won accounted for 67.3 percent. Nearly 78 percent of manufacturing deaths occurred at small production plants where there were fewer than 50 people.
The measures come on the heels of a bill passed the National Assembly in January that upped accountability for serious workplace accidents.

Under the new law, top management could face up to one year in prison or a fine of up to 1 billion won if serious injury or death occurs as result safety failures.

Management can also be penalized if two or more workers are injured and need treatment for six months or longer or if the number of ill workers at a single workplace exceeds three in a year.

The company could pay up to five times the damages.

“We will continue to monitor if these measures are actually applied in the field,” said Labor Minister Lee Jae-kap. “We will do our best to reduce deaths.”