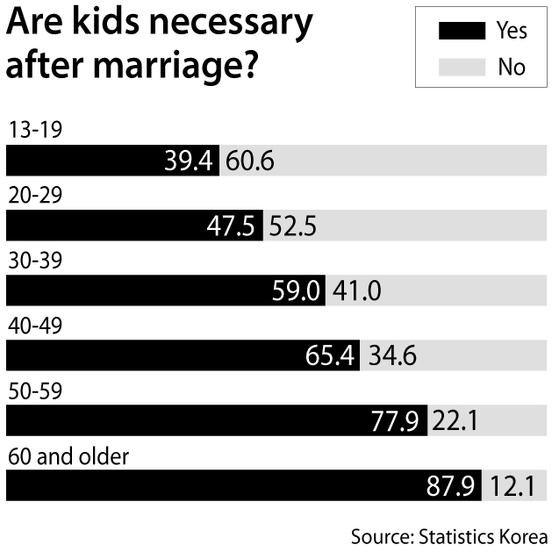 More than half of Koreans aged 13 to 29 think having kids after getting married is not necessary, adding to concerns surrounding the country's already continuously low birth rate.

According to the 2020 Social Indicators released by Statistics Korea on Thursday, the number of respondents who said having children is not necessary increased in all ages. In particular, the numbers exceeded half for teenagers (60.6 percent) and those in their 20s (52.5 percent.)

In other words, the younger and the higher the level of education, the more likely they are to think that they do not need children after marriage.

With more than half of Koreans under 30 not feeling the need for children, Korea's chronic birthrate problem is expected to worsen in the future.

Cho Young-tae, population research professor at Seoul National University Graduate School of Public Health, said, "In the past, the drop in birth rate was because people were marrying late. But the results show that [not wanting to have babies] have become a cultural phenomenon among the future generations, and it can be predicted that the marriage and birth rate of Korea could become worse than now."

Last year, the nation's total population was 51.78 million, and Statistics Korea predicted that the number is likely to recede after a peak in 2028 of 51.94 million.

The total fertility rate in 2020 was 0.84, down 0.08 points from the previous year, marking the lowest for four consecutive years after 2017.

The fertility rate per 1,000 women decreased in all age groups under 40, with the largest decrease for those in their early 30s (minus 7.2.)

However, men and women showed different perceptions regarding both marriage and childbirth.

Regarding marriage, 58.2 percent of men responded it is necessary, while only 44.4 percent of women said the same, bringing the gap to 13.8 percentage points.

More than half of Koreans responded they could not accept having a homosexual as their spouse, friend, co-worker or neighbor, with 57 percent. Those who could not accept an ex-convict came in at 69.4 percent. Women had a more negative perception than men towards homosexuals and ex-convicts, while those aged 19-29 showed more inclusivity than other age groups.

Many Koreans felt there are many social conflicts in the nation, especially between the left and the right.

Last year, 85.4 percent of people cited the liberals and the conservatives as the most severe conflict, followed by the conflict between the poor and middle/upper class (82.7 percent), and between employees and employers (74.2 percent.) Conflicts between gender (48.8 percent), religion (55.4 percent) and age (60.9 percent) showed relatively lower numbers.

60 percent of Koreans doubt social mobility possible for them