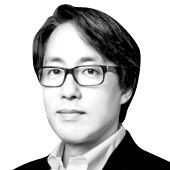 Stephen Yu
The author is the CEO of Willow Data Strategy.


People tend to listen to what they want to. Political polarization intensifies in many countries because the number of people — who indulge in videos and posts in line with their own views and strengthen their own system of beliefs inside the internet bubble — has significantly increased. Many people watch news not to gain new information but to confirm the righteousness of their ideas.

That’s why they focus on watching websites and broadcasts they like. When the bias becomes more serious, people easily fall for conspiracy theories and treat content contradicting their own beliefs as fake news regardless of factual nature and credibility of the source. They have a hard time dealing with people with different opinions and digesting different ideas.

Polarization is so severe in the United States that I doubt whether the moderates the two parties want to focus on to win the presidential election actually exist at all. Key issues in the U.S. election campaigns are very diverse, including economy, diplomacy, security, environment, tax, welfare, immigration, education, health insurance, disease control, racial conflict, gun control, gender equality, abortion rights and sexual minority rights. As a result, extremely few will totally agree on all these controversial issues, but when you divide people into friends and foes, most topics are buried in factional logics. When the people who view the complicated world only in black or white become the majority, the foundation of democracy may shake. Unfortunately, popularization of social media resulted in revealing the limits of America’s two-party system too soon.

The good function of social media cannot be ignored, but concerned voices grow as a few influential figures can easily mislead the public in a polarized society. When you want to persuade people with solid belief systems and factionalism, all you need to emphasize is that you are nominally on their side. Moreover, as artificial intelligence (AI) learns from human speech and actions without modification, it is scary how it automatically deepens and intensifies bias.

Influential social media makes propaganda and instigation very easy. But will blaming Facebook and YouTube — and giving them the right to censor — really resolve the problem? It’s like blaming the sound equipment and media for Hitler and Goebbels’ propaganda. The act of exaggerating and reproducing false information with impure intentions and taking advantage of it is bad in and of itself, and furthermore, the public who actively believe apparent lies are partly responsible as well.

Just as not all visual information coming into the eyes is processed by the brain, people have to selectively accept overflowing information. Here, the standard of making the selection is important. When asking about factual grounds, the most pathetic answer would be, “I read it in a book!” Do you really believe everything printed as it is? Published writings may have gone through certain verification at least, but online posts can be written by anyone. It is the same as the one-dimensional rhetoric of “I believe it because people on my side said it.”

Verifying information is not easy even for those specializing in data. But even the general public must have the critical mindset now to have doubts about everything and verify. First of all, information should not come from a single source. Data’s value is remarkably enhanced when multiple sources are integrated. You should also cite conflicting data even if you would later choose to ignore it after review. Information should be viewed without emotion. If you put emotion ahead of reason, you will reach a conclusion before verifying.

You should refrain from trusting information no matter where it is from and should search and verify using various methods even if it is troublesome. Avoid being completely dependent on the internet and turn off devices if needed. You should be especially careful about the articles and videos recommended by AI based on past behavior, as they could be a trap solidifying your existing belief system. Rather than passively watching recommendations, you must proactively pick a theme and search information.

The world has changed. As social media connects people and provides real-time information, you can criticize it sometimes but cannot get rid of it altogether. You can enjoy instant noodles once in a while, but you can get sick after eating it for three meals. You should not indulge in the information just because it pleases your ears.