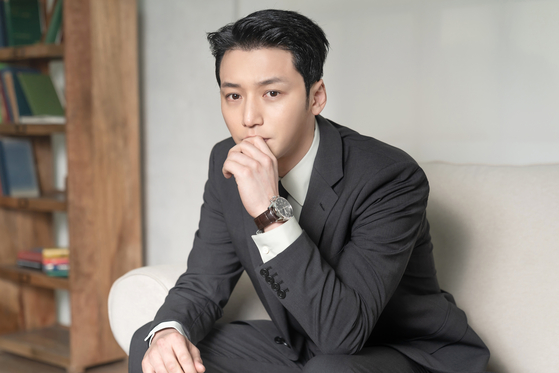 Struggles a young fisherman might have faced about a century ago come alive thanks to actor Byun Yo-han's performance in upcoming movie “The Book of Fish.”

In the black and white movie that’s set to hit local theaters on March 31, Byun plays a character named Changdae, who dreams of leaving the sea behind him and studying for a better future on dry land. He meets Joseon era scholar Jeong Yak-jeon, who has been exiled to Heuksan Island. Through conversing with Jeong, Changdae starts to understand what things are most important to people.

“You really have to act with your eyes and voice when filming a black and white movie,” said Byun during an interview with the Ilgan Sports, an affiliate of the Korea JoongAng Daily, adding that he was thankful to get a chance to be in such type of movie. “Even though I may seem clumsy, I wanted to act genuinely.”

Below are more edited excerpts from the interview.


Q. What was the most difficult part of filming this movie?
A. Speaking in a regional dialect and working with live seafood was not that difficult. Deciding how to act out my character Changdae was more agonizing. I needed to do more than just express the character with my body. Changdae is somewhat similar to me. He was someone that many youngsters can sympathize with. Maybe that’s why I wanted to do a little better. I thought about what viewpoint Changdae, a youngster in that time period, would have of the world, and what kind of academic challenges he wanted to take on. I wanted to maximize what Changdae must have felt in his teens, 20s, and 30s to make my character a better version of himself.


What did you learn from senior actor Sol Kyung-gu?
I really got so much inspiration from him. He jumps rope 1,000 times every day in the morning. And then he does his laundry and then jumps rope again. His room was right across from mine, and I couldn’t just stay not doing anything. I had to run around. Those patterns of behaviors show what things are needed to be done to fully prepare before the shooting of a scene. He doesn’t even look at scripts when he is on set. He has already memorized everything. With that energy, he stays more relaxed and with that relaxed mind he takes care of the younger actors. It is impossible to not have chemistry with him. It is all because he is just so perfect. I really learned a lot from him.


How about working with actor Lee Jeong-eun?
It is the second time working with her since the 2018 drama “Mr. Sunshine.” I unfortunately didn’t get to see her much while working on that drama, but we did have some scenes where we share some emotional connections. This time, it was very nice that we got to stay on the island together and spend more time together. Even though what I heard were lines of the movie, the way she talks is very warm. She seems to have that power to embrace everyone, and that made me look back on where I am. I relied on her a lot. 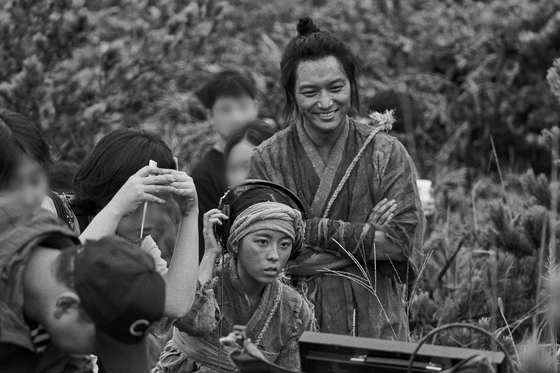 A scene from black and white movie "The Book of Fish" with actor Byun Yo-han, who plays a fisherman named Chang-dae. [MEGABOX PLUS M]

What was it like working with director Lee Joon-ik?
He knows how to see strengths in people and cover up the weak points. He always says he is friends with actors, and I understood what he meant as I filmed with him.

What was it like to experience the island weather?
While we were filming, three hurricanes hit the island. One time I was in Seoul for an event, and that’s when the hurricane hit. I texted the crew but no one answered so I was really worried. And I thought the next time such hurricane comes, I’ll definitely be there with the team. I experienced two hurricanes with the director and Sol. It was the first major hurricane to hit the island in 59 years, but the power of our movie must have been bigger as the hurricane just went away easily.


How did you feel when you watched the final version of the movie?
I tried to hold back tears, but as I watched myself on screen, I was reminded of many different memories I had on set. I think they were very thankful tears. There is a hollow inside me. The emotions hit me hard because I got to watch the movie a long time after we were done filming.


What do you mean there is a hollow inside you?
I think it’s passion and love. Every character in the film was very warmhearted. There were times when things were very confusing but the laughter never stopped. Such mystically complex emotions shared by all the actors and crew really made a mark on my heart.

The book of fish Byun Yo-han