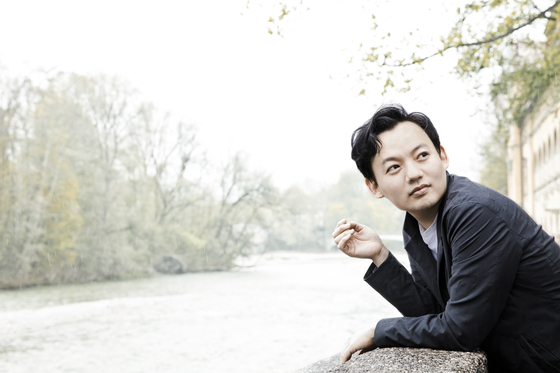 
William Youn is the pianist behind “Dear Luna,” the magical dance drama performance by ballerina Kim Ju-won that premiered at this year’s Tongyeong International Music Festival on March 26.

“Although I don’t really know a lot about ballet, I enjoy watching it,” said Youn. “A few years back, I performed with a German ballet company and I really enjoyed the experience. I do love sharing a stage with other artists whether they are classical musicians or from other genres. In fact, I feel so grateful to be even able to hold any type of performances amid the coronavirus pandemic.”

Youn, who resides in Germany and is an active solo pianist across Europe, says about 50 of his  performances were canceled due to the pandemic.

“I was quite surprised to hear that Korea has been holding offline performances although you have to have one vacant seat between strangers,” said Youn. “I was proud of Korea because even in Germany, which is a country that really appreciates classical music and has a long history of classical music, it seems like it doesn’t really know what to do. There’s just tension between the performing arts world and the politicians without any action taking place.”

Last year’s Tongyeong International Music Festival was also canceled because of the pandemic, but after learning that it would go ahead this year, Youn said he packed his bags straight away and flew to Korea, not only for “Dear Luna,” but also for “Piano Marathon Concert,” which was held on Saturday and saw him take to the stage with three other pianists — Kim Tae-hyung, Kim Da-sol and Park Jong-hai.

“I really looked forward to meeting them,” Youn said. “They are my juniors and I haven’t seen them for a while. It’s always good to catch up with them in our motherland and also perform together.”

It's not just the music festival drawing Youn back to Korea.

For the first time in two years, he will be holding a recital in Korea titled “A Psalm of Life,” a title that suits the pianist whose nickname is “poet on the piano.” Youn will be making stops at two cities — Daegu on March 30 and Seoul on April 16.

“I was in lockdown in Europe and unable to perform for nearly a year which gave me enough time to reflect on myself [...] You know, I wanted to be introspective and really look in the mirror,” said Youn. “So I selected Ravel’s piece titled ‘Miroirs.’ The program was drawn up with that theme. I feel like Schubert's pieces also reflect his emotions of that time. He expressed his feelings through music. So I matched that with Ravel’s piece.”

Along with Schubert, Youn also cites Mozart, Schuman and Chopin as his favorite composers.

“My piano teacher once told me that the [above mentioned] four composers are the most difficult ones to teach because you have to really understand their emotions to play the pieces at a certain level,” he said. “For Beethoven or Bach pieces, he said that you can play them at a certain level if you understand the message in the pieces but not the works written by [Schubert, Mozart, Schuman and Chopin.] I don’t know why but I am more attracted to those emotional pieces. Whenever I play Schubert’s pieces, I really try to sympathize with his emotions, become a wanderer and feel that loneliness.”

Youn is the only Korean pianist who has signed with Sony Classical. Last September, he released a double album “Schubert: Piano Sonatas I,” which manifests the first part of his major project — the complete recording of all piano sonatas by Franz Schubert. The album was critically exalted by international media, one of them being the BBC Music Magazine, which said “Youn’s lightness of touch is matched by weighty emotional depths, deep understanding and keyboard poetry.”

The second volume of the double album will drop in August.

“I am recording in this hotel near the Alps where I can enjoy the great view,” he said. “Usually the recordings get done in old European churches but I am really lucky to do mine there. During the pandemic, the hotel was closed, but Sony rented the whole place for me so I could record under the best conditions. I appreciate all the support and the album will sound great.”

Songkran Music Festival is coming to Korea on July 9, 10