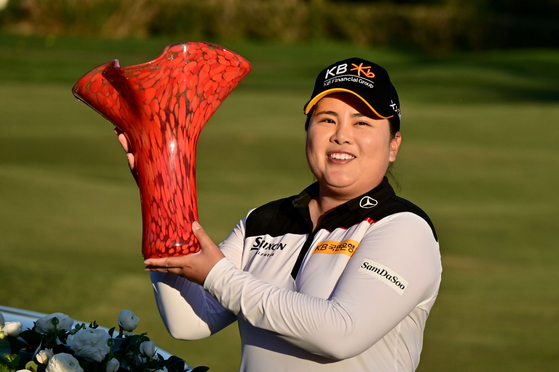 Park In-bee holds the winners trophy after her -14 under par victory during the final round of the Kia Classic at the Aviara Golf Club in Carlsbad, California on Sunday. [GETTY IMAGES/YONHAP]


Park In-bee picked up her 21st LPGA Tour win at the Kia Classic on Sunday, ending the tournament with a big 14 under par at Aviara Golf Club in Carlsbad, California on Sunday.

LPGA Hall of Famer Park started strong in her first tournament of the season, leading every single round to finish with a five shot lead ahead of Amy Olson and Lexi Thompson of the United States.

Park got off to a strong start on the first day of the tournament, finishing the first round at six under, 66, to take a one shot lead ahead of Kim Hyo-joo.

Park held onto that lead throughout the weekend as a series of contenders tried and failed to catch up. Kim slipped back on Friday as Sophia Popov of Germany pulled into second, only to drop out on the next day as Park pulled further ahead with a comfortable five shot lead on day three with Hur Mi-jung of Korea, Minjee Lee of Australia and Mel Reid of England tied for second.

Olson and Thompson rose up the pack to take second place in the fourth round, but the damage was already done and Park led with a big 66-69-69-70 for a total of 14-under 274. World No. 1 Ko Jin-young of Korea rounded off the top four, with Kim and Lee tied for fifth.

“Everybody asks me like, ‘Do you still get nervous?’ Yes, of course. ‘But you look so comfortable. Are you comfortable?’ I’m like no, what do you expect?,” said a smiling Park after the tournament. “What is special about this week is I always love to play [the Kia Classic] and I have played really, really well on this golf course but I was never able to win. I looked at the trophy before the final round and thought I almost had it a couple of times. Finally being able to win is a relief and it is a beautiful trophy.”

With the win, Park joins LPGA founder Marilynn Smith at No. 25 on the all-time wins list. Park took home $270,000 from the prize pot, taking her career total winnings to $17,003,925. She is the fourth golfer in LPGA history to pass $17 million in tournament earnings.

“It’s a big honor to put my name next to someone like Marilynn Smith, a founder on the LPGA,” said Park. “I’m going to try and keep playing my best to follow her footsteps."

At 21 wins, Park is now just four behind Pak Se-ri, the winningest Korean in LPGA history who's emphatic arrival on the LPGA in 1998 inspired a generation of young golfers, including Park and most of her peers.

“She gave a lot of courage to women golfers in Korea that we can compete out on the LPGA," Park said. "Being able to do things that follow her steps is always a great honor. Growing up, I definitely looked at Se-ri as one of my top players to look up to. It’s always a good vibe going into the major tournament.”

Park also takes home a brand new 2021 Kia Sorento as a sponsor prize with her win at the Kia Classic, the first car she has ever won despite her long career.

Park joined the LPGA Tour in 2007 and picked up her first win the following year, at the 2008 U.S. Women's Open. Now in her 15th season on the Tour, Park has won seven major championships and was the youngest person ever to qualify for the Hall of Fame, at 27 in 2016. She is the 26th person ever to reach 21 career LPGA wins.

The Kia Classic was Park's first start of the 2021 season, having taken some time off since her last appearance at the 2020 CME Group Tour Championship in December last year. Park's emphatic return is well timed, ahead of the ANA Inspiration this week, one of the five major tournaments on the LPGA Tour.

Winning the week before a major has paid dividends for Park before — in 2013 she won the Walmart NW Arkansas Championship and then rode that momentum into the following week to win the U.S. Women's Open. Park will be looking to repeat that success this year.

For world No. 1 Ko, the Kia Classic was also an opportunity to warm up ahead of the ANA Inspiration.

“I had a good warm up I think, so I’m looking forward to the ANA,” said Ko, the 2019 ANA Inspiration champion. “I had great rounds the last four days. Before this week, I practice four, five days and stayed a week at the Mission Hills. I saw my name on the bridge and believed I could win [again] on the course.”

Park and Ko weren't the only Korean golfers to have a good weekend at the Kia Classic.


World No. 215 Kang Hae-ji may not have finished the tournament strong, but she takes home the honor of hitting the first hole-in-one of the 2021 LPGA Tour, finding the hole on No. 11 with an 8-iron from 154 yards in the second round on Friday. That hole-in-one also won $20,000 for the St. Jude Children's Research Hospital as part of the CME Group Cares Challenge program.

The LPGA Tour will be back in action on Thursday at the ANA Inspiration at Mission Hills Country Club in Rancho Mirage, California.

Kim In-kyung looks to return to form at ShopRite Classic