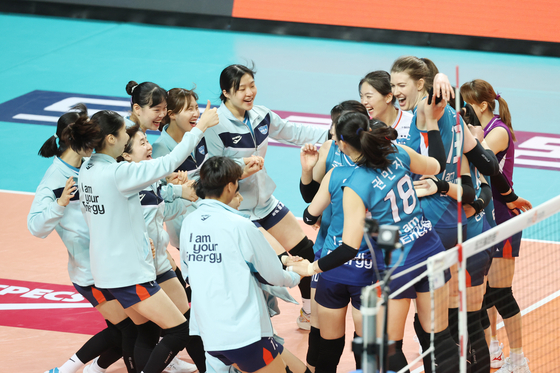 The GS Caltex Seoul KIXX celebrate after taking a 3-0 win in Game 2 of the V League Championship series against the Incheon Heungkuk Life Pink Spiders at Jangchung Arena in central Seoul on Sunday. The KIXX now lead the series 2-0. [YONHAP]


The GS Caltex Seoul KIXX could have a sweep on their hands.

The KIXX beat the Incheon Heungkuk Life Pink Spiders in straight sets in Game 2 of the best-of-five championship series at Jangchung Arena in central Seoul on Sunday. With the win, the KIXX now have a 2-0 lead in the series and look unstoppable going into the third game on Tuesday.

The Pink Spiders, who until the middle of the season were the clear favorites to win this year, have found no answer to the unstoppable KIXX, unable to even take back one set in the series so far. With back-to-back 3-0 wins on Friday and Sunday, it seems like it's just a matter of time before the KIXX lift the championship trophy.

The KIXX surged from behind to win the 2021 V League season, knocking the Pink Spiders off the top of the league at the end of the season and cementing their victory with a game left in hand. It was the first time in 12 years that the Seoul side topped the table.

The Pink Spiders were expected to dominate this season with the return of Korean volleyball legend Kim Yeon-koung and the addition of Lee Da-young, joining her twin sister Lee Jae-young on the squad. The Spiders were firmly in the lead until the middle of the season.

However, a series of scandals including injuries and substitutions led to the team seeing both of its star twin players banned and its shot at the trophy quickly disappear.

With the season win, the KIXX earned a ticket straight to the championship while the Pink Spiders had to face the IBK Altos in a close playoff series to earn their shot at redemption. So far, it looks like that revenge is not on the table.

The 2021 V League Championship will continue with Game 3 on Tuesday at Gyeyang Arena in Incheon. If the Pink Spiders win, Game 4 will be on Thursday and if needed, Game 5 will be on Saturday.