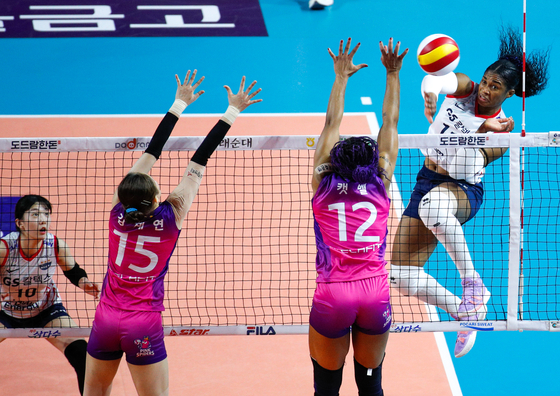 
The competition for third place in the V League standings is firing up as GS Caltex Seoul Kixx defeated Incheon Heungkuk Pink Spiders 3-1 on Sunday to cut their winless streak and step up to third place.

GS Caltex had recently struggled to find their form, dropping three matches against Korea Expressway Corporation Hi-pass on Dec. 19, Korea Ginseng Corporation on Dec. 24 and Suwon Hyundai Engineering & Construction Hillstate on Thursday, whereas the Pink Spiders were on a four-game winning streak, the longest streak they had been on since the start of the season. 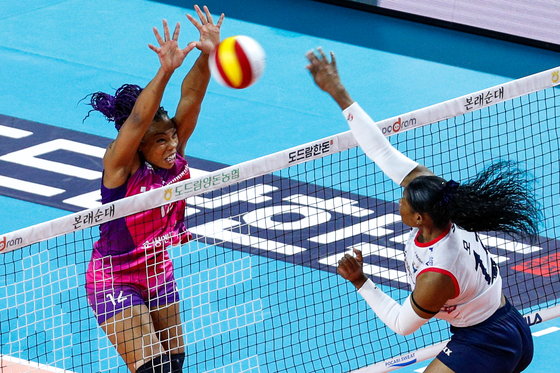 
The Seoul club and Incheon club have some history, including last season when the Pink Spiders lost to the Kixx in the Championship series and missed out on the trophy.

The Pink Spiders hold the most V League titles of all seven clubs, having won the Championship title in 2006, 2007, 2009 and 2019. They also finished runner-up four times in 2008, 2011, 2017 and last season. The Kixx achieved the first ever treble in women’s professional volleyball history this March, taking the Championship title after winning three games of the best-of-five championship series, alongside the regular season title and the pre-season tournament KOVO Cup.

On Sunday, Laetitia Moma Bassoko of GS Caltex was the best scorer of the match, scoring 40 points alone. Moma Bassoko leads the V League standings for the most attacks and is runner-up in the most points.

The seven teams play a total of 36 matches during the regular season, facing the six other teams six times each. With more than half of the season already played, Hillstate sit at top of the standings with 18 wins and one loss, Hi-pass is in second position with 15 wins and four losses, and GS Caltex sit third with 12 wins and eight losses.