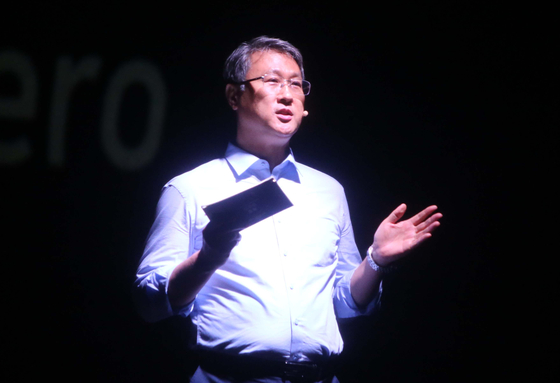 Park Jae-hyeon, K-water CEO and AWC president, during an event in 2020. [YONHAP]

The biggest water forum in Asia will be holding its board meeting in Seoul on Wednesday, according to Korea Water Resources Corp. (K-water) on Tuesday.

The 27 institutions on the Asia Water Council (AWC) board include the Korean Environment Ministry, K-water, the Ministry of Foreign Affairs and KDI. China’s Ministry of Water Resources, Indonesia’s Ministry of Public Works, Thailand’s Office of the National Water Resources and Mongolia’s Water Services Regulatory Commission are also on the board.

The meeting will be held both offline and online.

According to K-water, the issues that will be discussed include a review of new projects, which will address water shortages or deteriorating water related infrastructure in Asia. Last year, several projects, including an integrated water management project in Laos and smart-water management in Bangladesh, were green-lit.

Additionally, the AWC board will be reviewing a report on global water welfare, which will be later used in choosing new projects.

AWC and KDI will be signing an agreement in which to create an international cooperative network as well as joint research on water welfare.

“The AWC is working hard to solve practical problems related to water, including a shortage of drinking water and water quality experienced throughout Asia,” said K-water CEO Park Jae-hyeon, who is also the AWC president. “We will work harder so that AWC will play its role as the platform for cooperation in dealing with issues that humanity faces together, including Covid-19 and climate change.”

The AWC, which was founded in 2016, has 144 institutions from 27 countries as members. It is the largest water-related group in Asia.

This year the AWC will be holding its international conference in Labuan Bajo in Indonesia in November. The conference is held every three years.

The first Asia International Water Week was held in Gyeonju in 2017. The second forum was to take place last year, but it was postponed due to Covid-19.