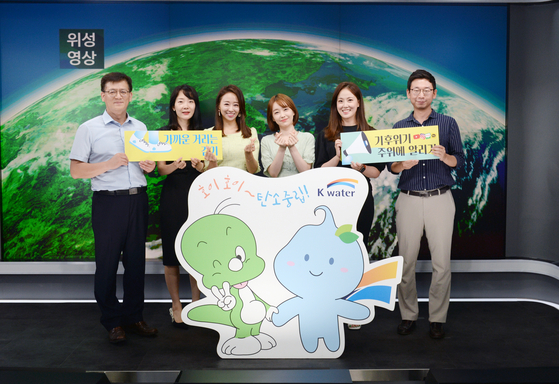 Weather forecasters and reporters from KBS join in the K-Water campaign to encourage people to reduce their carbon footprint in their daily lives. [K-WATER]

Korea Water Resources Corporation, or K-Water, has launched a campaign to encourage people to reduce their carbon footprint in everyday life, the company announced July 1.

Starting on June 29, the campaign is in line with the government plan to reach carbon neutrality by 2050.

As KBS is the default broadcaster in case of a disaster or emergency, its weather forecasters and reporters joined the event to raise awareness of the severity of climate change and promote carbon neutrality.

Kim Mi-kyung, dean of MKYU online university, was also present as Kim has been an advocate for the fight against climate change.
The campaign will last for six months, from June to December. To join the campaign, people should take a photo with Bangwool, K-Water’s mascot, and Dooly the Little Dinosaur at a special photo zone.

K-water plans to donate 10,000 won for every picture taken. The money raised through the campaign will be delivered to climate change activist groups at the end of the year.

Campaign photos will be uploaded online on the K-water website, with the consent of the participants.

“To work for carbon neutrality in daily life is no easy task, but everyone need to take action together to fight the imminent threat climate change poses to all of us,” said CEO Park Jae-hyeon of K-water.

“As KBS stands at the forefront of informing the public on the severity of climate change, we expect KBS’ participation in the campaign to encourage more people to join in achieving carbon neutrality through their everyday activities.”

K-Water is promoting carbon neutrality through other channels as well, with a promotional video featuring popular cartoon character Dooly.

Mirae Asset, IBK to team up on digital payments