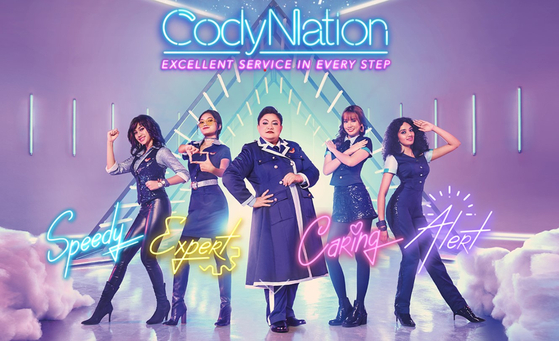 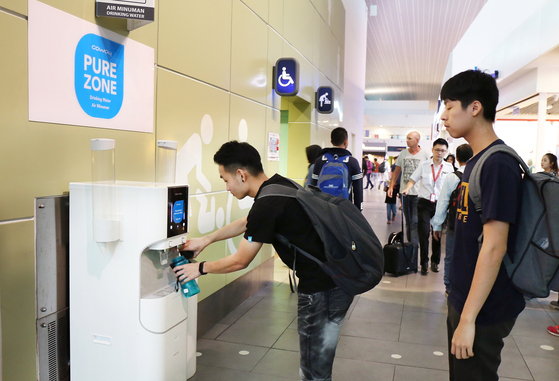 Visitors at the Kuala Lumpur International Airport use a Coway water purifier. [COWAY]

Travelers deplaning at Kuala Lumpur International Airport are greeted by those ubiquitous Samsung large-screen televisions. They also find themselves face-to-face with another Korean brand not so well known: Coway.

The travelers may also run into these devices during their visit to the Southeast Asian nation. Water purifiers from the company are so popular there that the locals have adopted the word “Coway” as a common noun to describe any such device, similar to the way Kleenex, Band-aide and Post-it have become generic.

In Malaysia, water purifiers were not much used two decades ago, with bottled water dominating the market. But around 2010, demand started to rise for the appliances, and they are now a common sight at companies and in homes and public buildings.

Korean companies control the market, with a combined 61 percent market share. Coway, which is 25 percent owned by Netmarble, is the clear leader, with 35 percent of the market.

The success of Coway in Malaysia has led other Korean companies to explore the market, as Samsung Electronics and LG Electronics are active in the domestic market. Cuckoo and Chungho Nais are two companies that have followed.

Coway introduced water purifier rental to the Korean market in 1998. As the country had just been through the Asian financial crisis, budgets were tight and rentals allowed people to have the appliance without a big capital outlay.

Overseas expansion has been a key strategy for Coway. The company incorporated a subsidiary in Malaysia in 2006 and recorded a humble 300 million won of sales there in 2007.

The watershed moment came in 2010 when it became the first water purifier manufacturer to acquire Halal certification, a document that guarantees that products and services meet the requirements of Islamic law.

“The certificate is important for a product to be well-received by the Muslim population to ensure that the manufacturing process and the products is free from banned ingredients, including alcohol, pork extracts and certain other substances,” said a spokesperson at Coway.

Following the move, subscriptions jumped by 160 percent in a single year.

By 2015, the company had a 17,000-strong “Coway Lady” army. These Cody, as they are affectionately known, provide customer support, check the filters on the devices and engage in sales and marketing activities.

The service has helped boost the reputation of the company, and it achieved annual average sales growth of 45 percent over the last five years.

“The key to success of making Coway a household name in Malaysia lies in the rental care service that we introduced for the first time and localization efforts,” said Kyle Choi, Managing Director of Coway Malaysia.

Coway has introduced a number of products specially designed for the local market. Its Ombak purifier only provides hot water since Malaysians tend to drink boiled water except for during extremely hot weather.

The product is targeted at Malaysians who don’t want to go to the trouble of repeatedly boiling water throughout the day.

“Changing lifestyles due to two full-time working parents causes difficulties for them to have hot water since it is time consuming,” according to research conducted by the Korea Trade-Investment Promotion Agency (Kotra)’s Malaysia office in Kuala Lumpur.

Coway products in Malaysia are must in demand by people in their 30s and 40.

Demand for Coway products in Malaysia is helped by the frequent water cuts in some of the urban areas in the country. Having one of the company’s appliances in the house insures a steady supply of potable water regardless of problems at the public utility.
Millions in the Klang Valley, which includes Kuala Lumpur, Putrajaya and nearby suburbs, have suffered repeated water cuts and have often found their water polluted and emitting a foul odor.

“Over the years, Malaysians are experiencing water cuts that disrupt daily lives,” the research said. “Following frequent water cuts in the Klang Valley caused by unidentified odors, people worry about quality of water.”

The recurrent cuts have undermined trust in the state-run utility that supplies tap water.

“People who are not confident in the treated water reaching their homes, will install water purifiers,” the Kotra research said. “With the new technologies provided by water purifier company, water purifiers are in high demand.”

Last year, the total fell to $236 million as a result of the pandemic and the resulting economic weakness.

Coway is facing competition in Malaysia from 3M, Panasonic and Amway.

Coway’s success and the market saturation at home has inspired other smaller companies to enter the Malaysian market.

Cockoo Homesys, a rental service provider best known for its rice cookers, entered the country in 2015 and is now No. 2 in the market. Chungho Nais and SK Magic followed in 2018.

While Coway holds the top slot with 1.6 million account holders Cuckoo has 1 million.

Coway claims the top position in Korea, but the home market has been stagnant.

In the final quarter of 2020, rental revenue fell 6 percent in Korea. In Malaysia, revenue rose 44 percent in that quarter, according to Park Shin-ay, an analyst at KB Securities.

In Korea, the penetration rate of water purifiers has been stuck at about 60 percent since 2017, and the total market size is around 2.5 trillion won.

Samsung Electronics entered the market this year, though it is not offering a rental option. LG Electronics has offered the product since 2009.

Coway and Cuckoo opened offices in Vietnam and Australia last month to diversify their revenue. Indonesia is also seen as a promising market, as the country has an unmet need for clean water.

Most Indonesians lack access to piped water, and nearly 40 percent of the country purchases packaged water since the rivers are too polluted to be sources.

“There is a widespread perception that water can be bought as 38.25 percent of the population surveyed purchases bottled water,” said Lee Na-yeon, an analyst at Daishin Securities, “The growing use shows that there is high demand for clean water, which could translate into possible expansion of water purifier industry.”

Cuckoo started operating in Indonesia in 2018, followed by Coway’s entry in 2020.

Korea appliance makers are looking to offer a wide range of products overseas, including air purifiers, mattresses and bidets.

The air purifier market seems the most promising, as fires in Indonesia and urban pollution have resulted in low air quality throughout the region.

“Air purifiers will likely become the second generation of rental products after water purifiers as air pollution is a serious issue in Malaysia due to the haze,” said Lee, the analyst at Daishin Securities.

A smog-like haze blankets the country especially between June and September as farmers in Indonesia and other neighboring countries slash and burn to clear the land to for make way for palm oil, pulp and paper plantations.

The practice led into an intense level of haze that could increase the risks of respiratory infections, and skin and eye irritation.

“The pandemic also contributed to the rising sales of air purifier year,” Lee said, adding that the export of air purifiers to Malaysia jumped 47.5 percent as of October, last year, compared to the first ten months of the previous year.

Competing with “the world’s factory”

Despite the brisk business in Malaysia, it remains to be seen whether the Korean service providers can maintain dominance.

One of the biggest threats is price-cutting Chinese rivals like Xiaomi.

The market share held by Chinese companies for water purifiers significantly increased in recent years, as the portion rose to 17 percent last year from 11 percent in 2016.

U.S. companies, such as 3M and Amway, held a combined market share of 5.6 percent last year.

The operators are under pressure in terms of product safety, especially after three ice-making water purifier models made by Coway were found to have been leeching nickel.

The three models were never shipped to Malaysia, according to Coway.

“All these 3 models have never been supplied to Coway Malaysia and any other types and models of Coway water purifiers do not have the same and/or similar issues,” the Malaysia’s Coway Facebook page commented, after a number of consumers raised concerns.