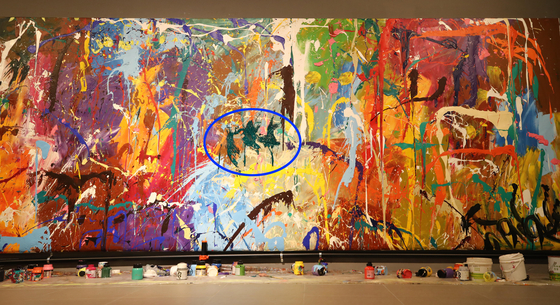 According to the police on Monday, a Korean couple in their 20s painted over a mural at Lotte World Mall in Songpa District, southern Seoul on Sunday afternoon. The couple thought the mural was just graffiti and that they could participate since there were paint cans and brushes lying in front of it.
However, the mural was “Untitled” (2016), a painting by renowned American graffiti artist JonOne which he created when he visited Korea. The painting is on display as part of an exhibition titled “Street Noise.” The couple left a large splash of teal paint (circled) on the artwork. They were still shopping in the mall when the manager of the exhibition discovered their handiwork and called the police. Representatives from the exhibition are mediating between JonOne and the couple to resolve the issue without legal action. [YONHAP]