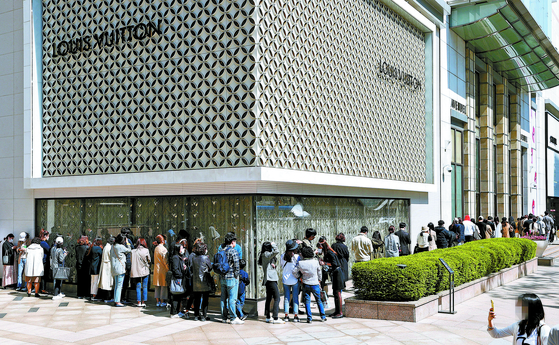 The Composite Consumer Sentiment Index (CCSI) increased to 100.5 points in March, up 3.1 points from last month, according to the Bank of Korea. This is the third consecutive monthly rise and the first time Korea’s CCSI exceeded 100 since the Covid-19 outbreak in January 2020.

Credit card companies say “revenge shopping” is one of the contributing factors, as pent up demand results in actual sales as the pandemic recedes.

Spending on automobiles rose 33 percent and spending on department store products rose seven percent in February on year, said a spokesperson for one of the credit card companies in Korea.

The spokesperson added that a jump in automobile sales is unprecedented, adding that people opted to spend on cars instead of traveling abroad.

Sales of Lotte, Shinsegae and Hyundai Department Stores from Feb. 26 to 28 all increased approximately by 50 percent compared to the same period a year earlier.

“On top of high hopes for the pandemic coming to an end, seasonal changes have also sparked the increase in spending,” said a source from the retail industry. "Sales of fashion and sports brands have prominently increased.”

The increase in consumer confidence is not a phenomenon unique to Korea, but is a general trend seen globally as hopes of returning to pre-Covid-19 life amps up as progress is made on vaccinations.