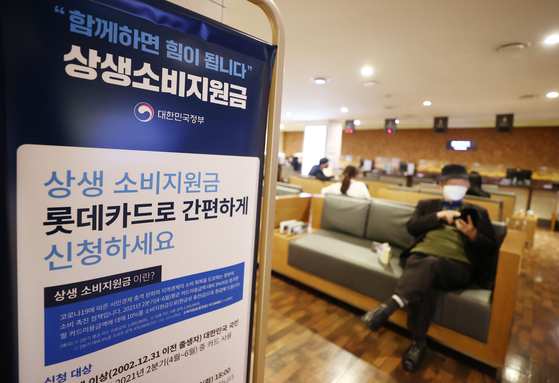 An advertisement promotes the government cash-back program at a credit card branch in Seoul in November. The government refund program was introduced to help small shop owners by encouraging people to spend. [YONHAP]


As of Nov. 26, 258.3 billion won ($216 million) has been returned to credit-card users in a cash-back program running for almost two months, according to the Finance Ministry on Monday.

Cash back from all programs totals 645.8 billion won. The government has allocated 700 billion to the programs.

An additional 6.5 trillion won of credit-card spending was made over the last two months compared to spending April to June due to the program, the government estimates.

The program was introduced in October as part of the campaign to boost consumer spending.

Those registered for the government cash-back initiative get 10 percent of any amount spent in October and November over 103 percent of their average spending in the second quarter of the year.

Due to heightened social-distancing restrictions since July, the government created a supplementary budget with the goal of helping small shop owners affected.

This not only includes a restrictive emergency relief grant, disbursed in September and given only to middle-and-lower-income households, but also compensation that covered 80 percent of losses related to social distancing.