Steelmaker Posco to focus on 'green and mobility' industries

Steelmaker Posco to focus on 'green and mobility' industries 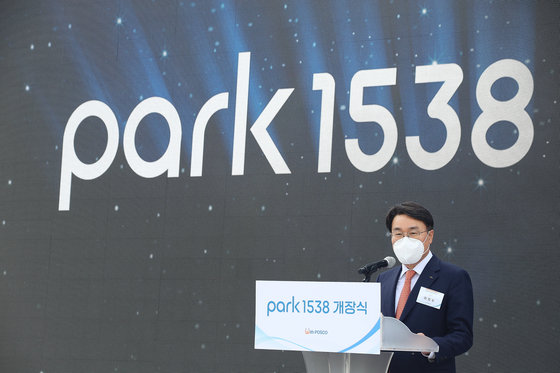 
After more than 50 years as Korea’s largest steelmaker, Posco now wants to focus on “green and mobility” industries.

“We’re standing a transition point where the industrial trend is shifting toward low carbon and environmental friendliness,” said Posco CEO Choi Jeong-woo in a message sent to Posco employees on Thursday to mark the steelmaker’s 53rd birthday.

“Posco Group has to go beyond the steel business and make a big leap to become a future leader in markets like electric vehicle parts, battery materials and hydrogen.”

Electric vehicles (EV) are one of the few ecofriendly industries that Posco has some experience in. The steelmaker has provided steel panels for automakers for decades and has experience dealing with raw minerals.

Posco currently produces lithium, nickel and graphite. With that supply, affiliate Posco Chemical manufactures cathode and anode materials and supplies them to battery makers. The plan is to increase production to 400,000 tons of cathode material and 260,000 tons of anode material by 2030.

There has been a certain degree of progress, the company says. Posco first started making big investments in EV and battery-related businesses in late 2017. As of March, Posco Chemical and Posco International — the two affiliates that lead the EV and renewable battery businesses inside the group — saw their market cap increase by 9.7 trillion won ($8.6 billion) and 20 billion won, each.

Over that period, the value of Posco’s stake in those two companies has increased by 6 trillion won, according to the steelmaker.

“By increasing the capacity of EV battery materials, the goal is to enforce the group’s value chain that starts from minerals like lithium and nickel to cathode and anode material,” said Choi.

“That would add to our business in steel material specialized in EVs and auto parts like motor cores, making us a total solution provider in the EV market.”

Another green business the company is venturing into is hydrogen. Steelmaking is one of the biggest producers of greenhouse emissions, but also creates hydrogen as a natural byproduct. Posco is developing technology and making investments to handle the production, transportation and storage of hydrogen.

The goal is to annually produce 5 million tons of hydrogen and raise 30 trillion won from hydrogen-related businesses by 2050.