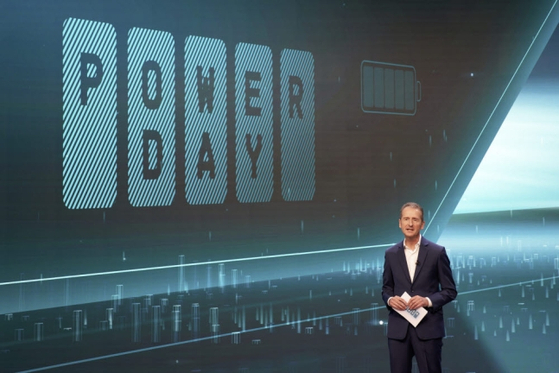 Volkswagen Group CEO Herbert Diess gives a presentation during a "Power Day" event where the German auto giant announced it would make its own batteries. [JOONGANG ILBO]


The sky appeared to be the limit for Korea’s electric vehicle (EV) battery business as the global EV boom drove up demand over the last few years.

With explosive growth projected in the EV market, it seemed like Korea’s battery business had a bright future ahead of it. The hype was so big that local media even began to add batteries to the long list of industries honored with a "K-" prefix — the K-battery business was born.

That dream, however, seems to be fading.

Chinese players are eating up the global market at an alarming rate, while the country’s top two battery makers have been locked in a fierce legal dispute for more than two years. 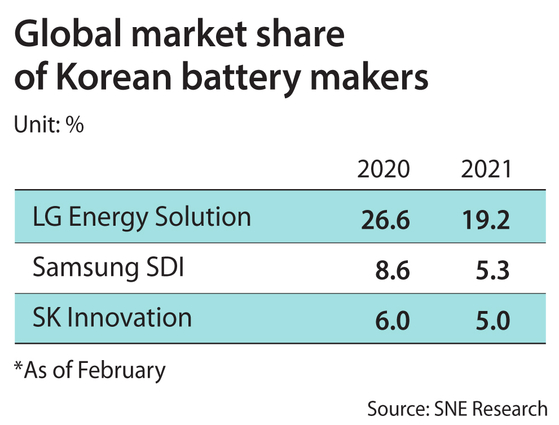 
Volkswagen’s recent announcement that it would gradually internalize battery supply sent a jolt through the Korean battery industry.


The German carmaker is the world's No. 2 in terms of EV sales, after Tesla.

It pledged to build six battery cell factories in Europe by 2030 to produce 240 gigawatt hours (GWh) capacity per year through joint ventures.

It was a scenario largely expected in the industry but they didn’t see it coming this soon.

“A technology gap would be inevitable as of now, but through joint ventures and partnerships, automakers will strongly engage in battery manufacturing in the near future,” said Kim Gui-yeon, an auto analyst from Heungkuk Securities.

“Considering global battery supply and cost structure, the need for automakers to develop their own batteries will only expand.”


The latest feud between LG Energy Solution and SK Innovation might have contributed in moving up the timeline, industry sources say.

“Volkswagen and Ford have to find another supplier within a certain timeline and that kind of unstable supply is a very big risk to automakers which have to launch a promised model within the promised time,” said Kim Pil-soo, an automotive engineering professor at Daelim University.

“Since the feud doesn’t seem to be ending any time soon, Volkswagen, which has a two-year shorter grace period than Ford, could have put such a plan into action faster than expected.”


LG Energy Solution and SK Innovation have been engaged in a legal dispute since 2019 regarding trade secret misappropriation and patent infringement. The U.S. International Trade Commission ruled in favor of LG in the main case, effectively banning SK Innovation from doing its EV battery business in the United States for the next 10 years.

Tesla CEO Elon Musk, right, says it will make its own battery called 4680 during its "Battery Day" event in 2020. [JOONGANG ILBO]


Ford and Volkswagen, which have signed contracts with SK Innovation for battery supply, have been given a grace period of four and two years to find other suppliers.

“Once the automakers succeed in installing even a small amount of self-made batteries in their EV lineup, it would be the start of a disaster for the battery makers,” said Park Chul-wan, automotive engineering professor at Seojeong University.


“Then they will try to push down the battery price from suppliers and battery makers will not have the negotiating power that they do now.”


Tesla, the biggest EV seller in the world, already announced last year that it will make its own cylindrical EV batteries. Japanese auto giant Toyota also said it is working on developing its own solid-state batteries.

Hyundai Motor and Kia recently fortified its battery R&D team at Namyang R&D Center, although they denied that they will use their own batteries in the near future. 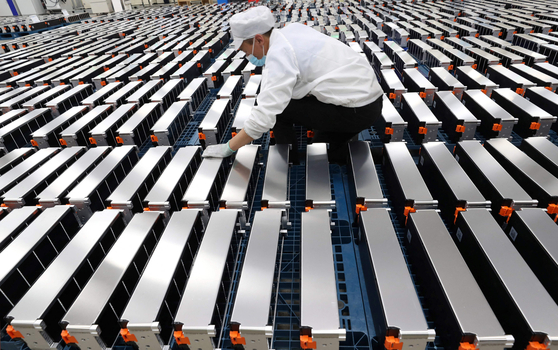 An employee inspects car batteries at a factory for Xinwangda Electric Vehicle Battery, which makes lithium batteries for electric cars and other uses, in Nanjing in China's eastern Jiangsu province. [AFP/YONHAP]


China on the rise

To make the situation even more difficult, Chinese players are eating up the global market at a remarkable speed.

Automakers are fortifying their partnership with Chinese battery makers as it is a prerequisite in order to sell their EV models in the world’s biggest EV market — China. The Chinese government doesn’t give out subsidies to EVs that are equipped with non-Chinese batteries.

Volkswagen recently announced it would change its battery type from pouch to prismatic, implying that it will further fortify its partnership with CATL, which makes prismatic as well as pouch batteries.

Hyundai Motor Group also reported earlier this year it had chosen CATL as a major supplier for its third batch of EVs produced on its dedicated modular platform E-GMP. The third batch supply deal is reported to be worth 9 trillion won ($8 billion).

Chinese batteries are 10 to 20 percent cheaper on average compared to Korean ones, according to industry sources, although no specific figures are confirmed.

“They are cheaper for sure, but in terms of technology, Chinese companies, especially CATL, are not that behind,” said Professor Park.

The gap has again widened this year, with CATL accounting for 31.7 percent of the market as of February while LG Energy Solution accounted for just 19.2 percent.

“Three Korean battery makers, which have put up a good fight last year despite the coronavirus, seem to be backing out due to Chinese players,” the research firm said in a report.

“With CATL at the head, Chinese players will trigger fiercer competition in the EV battery market in the near future.” 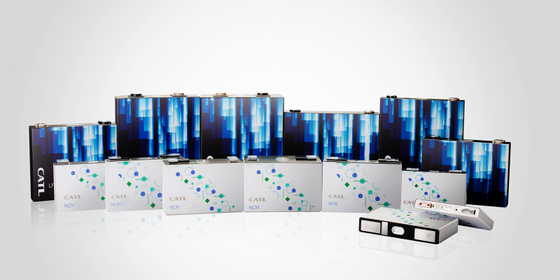