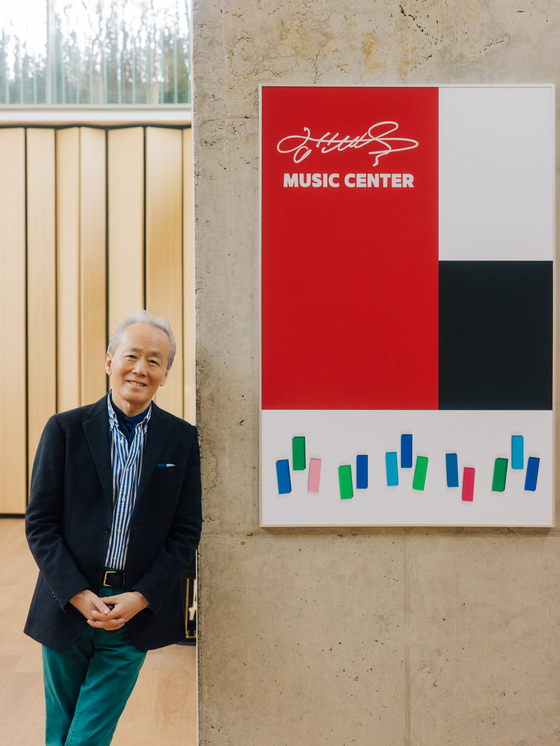 Maestro Gum Nanse poses for a photo inside the Concert Hall of the Gum Nan Se Music Center in Busan. [SONG SI-YOUNG]


BUSAN – To go see a decent classical music concert or a recital in Seoul, people either visit the Seoul Arts Center or the Lotte Concert Hall in southern Seoul, or the Sejong Center for the Performing Arts in central Seoul. These are just a few options among many for music lovers based in Seoul.

But such abundance is not necessarily the case in other parts of the country, even in Busan, the second largest city in Korea.

The largest is the Busan Cultural Center in Nam District, which can be regarded as the equivalent to Seoul’s Sejong Center — but that’s about it.

In efforts to help this populous port city resonate with more music lovers and become rich in culture, Kiswire, Korea’s secondary steel products manufacturer in Busan decided to establish a music center and dedicate it to maestro Gum Nanse, naming it the Gum Nan Se Music Center, or in short, the GMC.

“Busan people are quite straightforward so I’ve had some people who bluntly questioned aren’t such music centers dedicated to musicians usually after their deaths,” the 81-year-old Gum, who is alive and well, told the Korea JoongAng Daily on Thursday.

“It is true. For me, it’s also unheard of,” Gum said. “I do feel heavy on my shoulders. I bear much responsibility but I want to take this opportunity to really contribute to society together with Kiswire and educate young musicians here, provide platforms for musicians in Busan to collaborate, practice, and also hold concerts together not to mention offer a lot more to see and listen to for the people of Busan.”

The new GMC officially opened on April 3. It is located within Kiswire’s F1963 cultural complex site in Suyeong District, near Bexco. F1963 is an eco-friendly cultural complex that houses about 1,653-squre-meter (17,793 square feet) multi-purpose hall that can hold large sized exhibitions and concerts, as well as a library and a bookstore.

The company turned its old factory that was established in 1963 into a hip cultural complex. There are gardens inside and outside the factory building where people can walk around or sit down for some fresh air as well. The Busan Biennale in 2016 was F1963’s first event and since then, the old factory that had manufactured wire ropes for 45 years from 1963 to 2008 has been attracting about 600,000 people per year.

“Chairman Hong Young-chul of Kiswire was aware of all the innovative ideas that I’ve initiated, so he told me one day that he wants to establish a cultural complex using the old factory site that’s about 99,173 square meters as part of Kiswire’s corporate social responsibility,” said Gum.

According to Gum, it was him who started the New Year’s Eve concert at the Seoul Arts Center in 1992. Gum was the first artist in Korea to have commentary in between programs to help audience members better understand what they are listening to. He also started the 11 a.m. matinee concert about 20 years ago. 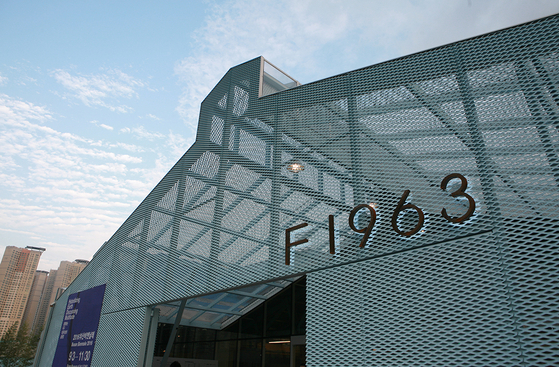 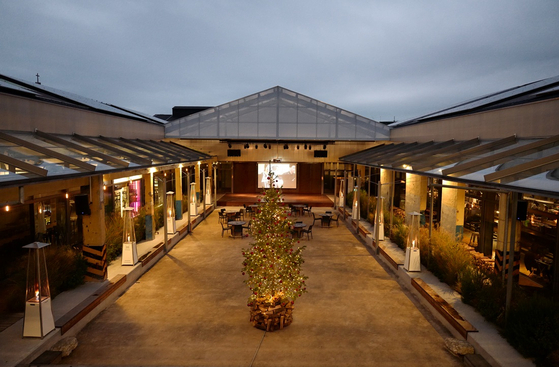 Kiswire's F1963, a cultural complex established by the steel wire manufacturing company in 2016 using its old factory in Busan. [KISWIRE]


“After establishing the F1963, he said he wants to use this extra plot of land next to the factory building to build a music center and give it to me,” said Gum. “For profit, the company could’ve used the plot to build a highrise or even rent the space. But the chairman is really keen on promoting culture and I feel like he dedicated this music center to me, even though I’m alive so that I can contribute more to society while I’m still available.”

Gum said he visits his hometown for concerts at least five times a year. But with the opening of the GMC, he believes he’ll be spending at least half the year here. Word of Gum coming to Busan quickly spread and he was requested to take on several roles. One of the roles he decided to accept was becoming an “adviser conductor” for a youth orchestra in Busan.

“I got a call from the Busan Metropolitan Office of Education saying that it has a 20-year-old Youth Center, which operates a youth orchestra called Gyomun Orchestra composed of 80 high school students in Busan,” said Gum. “Since I’ve been working closely with young students, I accepted the role. Actually, the phrase 'adviser conductor' is not a common term in the classical music world but they were aware that I couldn’t take on the full time conducting position and wanted me to visit them sometimes to give them advice and meet up with students.”

“But before I said yes to the position, I had one request, which was to change the name,” he said. “It may not be a big thing, but I don’t even know what ‘Gyomun’ means. You have to relate to the students and let them have pride in what they are doing.”

The youth orchestra relaunched as the Busan National Youth Orchestra last month with Gum as an adviser conductor.

“These students can also hold concerts at the GMC and rehearse here,” said Gum. “We are going to hold various workshops, master classes and really foster classical music in Busan and give back to the society.”

The new building housing the GMC is one story high and has one underground floor. It shares the building with Hyundai Motors that will also open a cultural center at the location.

One unique design of the GMC is that the four walls surrounding the ground floor of the concert hall, in other words, the upper walls of the underground concert hall, are made of glass. This is very unusual because “glass absorbs sound and that’s why you rarely see a window in professionally designed concert halls,” said Kim Nam-don, president of Samsun Engineering that worked on the acoustic design of the GMC.

Kim is also the acoustic and theater designer behind Seoul Arts Center’s Opera House and the IBK Chamber Hall, the Tongyeong Concert Hall, Goyang Arum Nuri Arts Center, among others.

“When I designed the GMC, maestro Gum asked me for just three things,” said Kim. “He said he wants it to be a place for everyone, a place where young people can dream and a place where classical music can be fun.”

Kim said that’s why he suggested using the glass walls so that people walking by can look into the concert hall that will also be used as a recording studio and a rehearsal hall for an orchestra. 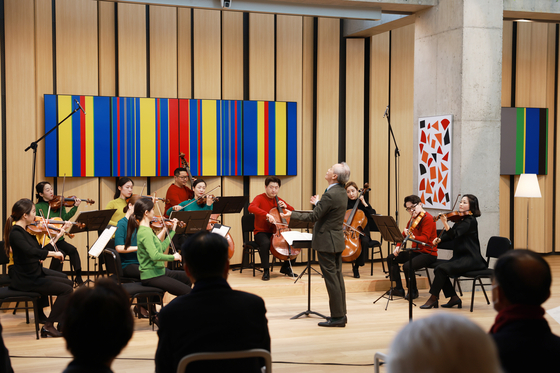 Gum rehearses with musicians at the Concert Hall of the new GMC prior to its official opening on April 3. [KISWIRE]


“I think classical music so far has been quite unreachable for the general public. I think that’s the problem of Korean concert halls,” said Kim. “By making it visible, I wanted anyone who wants to see what’s going on inside to just take a peek in. Classical music is not something that’s out of reach and difficult. It’s just underneath you.”

But the most important factor was the acoustics. 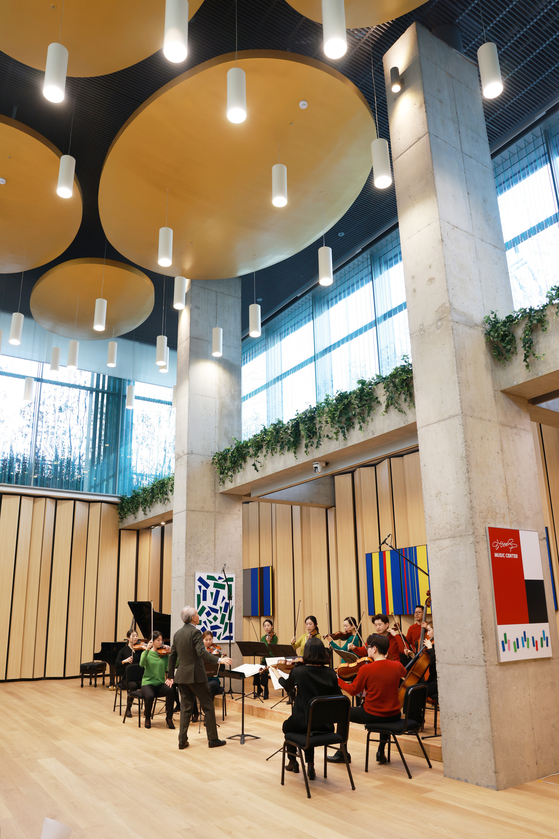 Visitors can look into what's going on inside the Concert Hall through the glass walls on the ground floor of the GMC. [KISWIRE]


Kim says he was able to use the glass walls because the space is not designed like a conventional hall. The size is smaller and there’s no distinction between the stage and the auditorium. It actually looks more like a rehearsal room of an orchestra but with better acoustics.

Moreover, Kim has inserted so-called “glass ribs” by “intricately working out the width of the ribs and the interval between each rib through multiple sound testings.”

“I think such design is the first in the world and especially in this era of the coronavirus pandemic, I think the time has come for an end to conventional style concert halls,” said Kim. “I think more and more quality venues that are smaller in size, and that have no boundary between stage and auditorium should be established.”

Maestro Gum said he’s more than happy with the outcome because he not only sees happy faces looking down at him and the musicians during they rehearse through the glass walls but also “the musicians are so pleased with the sound.”

“We’ve done about 12 unofficial concerts of various kinds so far to test the sound. We’ve done soprano singing, just solo piano, trio, wind quartet and so on, and every single one of them said they love the sound. It’s also important to please the public by creating an inviting atmosphere, but the quality should also be there. It’s a music center for everyone," said Gum.