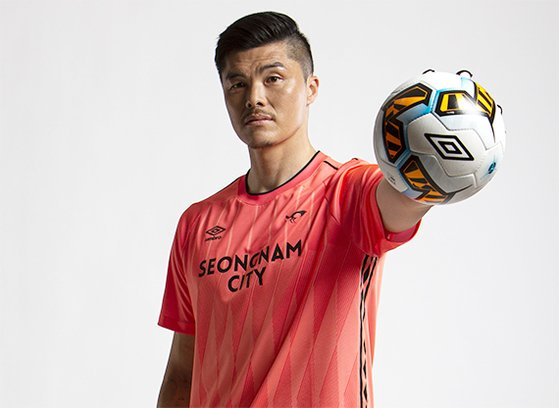 
Who says you can’t teach an old dog new tricks?

Kim Young-kwang, the thirty-seven-year-old Seongnam FC goalkeeper and oldest player in the K League is not only still in the game, but might just be stronger than ever.


“I have competed in countless matches and now I am the oldest K league player," Kim said in a recent phone interview. “I can honestly say that I have prepared for each and every one as if it were a championship game. I don’t remember slacking off in any one of them.”

As a goalkeeper who never lost a chance being on the starting lineup, his confidence was clear.

This season, Kim is at the center of the Seongnam FC lineup. Seongnam struggled last season, finishing the season in tenth place and narrowly avoiding relegation.

Seongnam are back with a vengeance this season, currently sitting in fifth place with 11 points with three wins, two draws and two losses to date, six points behind league leaders Jeonbuk Hyundai Motors.

Defense has been key to Seongnam's return to the top half of the table, and for nobody is that defense more important that Kim. Seongnam has conceded only four goals in seven matches so far this season, the joint fewest throughout the league.

Veteran Kim is always in the middle of it all, yelling orders and calling the plays. Unsurprisingly, his voice is always hoarse.

“When I see our players doing their best out on the field," Kim said, "I think to myself ‘I won’t concede a single goal’.”

Kim’s long run in front of the net hasn't always been easy. Kim stands at 1.83 meters (6 feet) tall, relatively short for somebody who's entire career is centered around guarding a 2.44-meter tall, 7.32-meter wide goal.

To make up for that height, Kim has spent years relentlessly honing his ability to hurl his body around the goal mouth, always trying to jump further and higher.

Back in his twenties, Kim used to spend hours every night trying to improve his agility by skipping with a jump rope, doing double unders where he had to jump high enough for the rope to pass under his feet twice with each leap.

If jumping is half the challenge for a goalkeeper, the other has to be keeping track of the ball. In training, Kim likes to have the ball kicked right at his face so that he can practice clearing it without flinching or blinking. Even when he does take a hit, Kim never looks away.

“Strikes can always curve at the end," Kim said. "I need to keep looking at the ball to be able to block it. I am still improving.”

Kim pays close attention to his physical and mental balance as well.

For twenty years, Kim has kept his weight between 86 to 87 kilograms (189 to 192 pounds), working hard to make sure he's in the same shape now that he was in his twenties.

Kim also wears the number 41, instead of the standard number one typically worn by starting goalkeepers, because 41 is the number he wore as a rookie back in his twenties.

“I chose that number to always look back at the start of my career and remember my initial passion for football," Kim said. "The number 41 always reminds me of that.

Kim is determined to win this year.

“I will give my everything to win," he said. "A strong defense is crucial to the team. And yes, you can teach a thirty-eight-year-old some new tricks.”