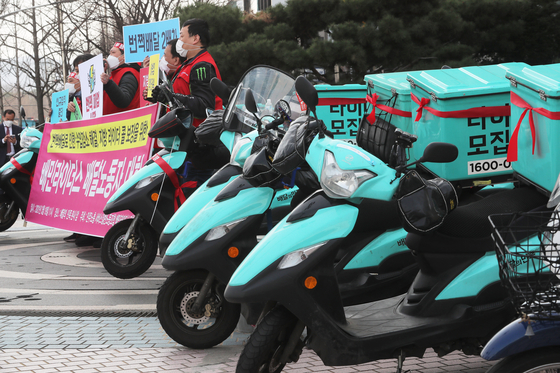 Baedal Minjok motorcycles lined up in Songpa where the developer Woowa Brothers' headquarters is located in March 2021. Germany's Delivery investment in buying Baemin was the biggest FDI in the first quarter of this year. [YONHAP]


Despite the Covid-19 pandemic, foreign direct investment in the first quarter of this year saw a significant increase, adding to growing anticipation of a robust economic recovery.

However, as nearly half of the investment was from a food delivery service acquisition, the first quarter figure could be a statistical blip.

According to the Ministry of Trade, Industry and Energy on Monday, foreign direct investment (FDI) pledges between January and March this year increased 44.7 percent from a year earlier to reach $4.74 billion.

In terms of investment that arrived in Korea, FDI increased 42.9 percent to reach $4,27 billion.

The government stressed that the figures were welcome considering that overall FDI in 2020 hit a six-year low due to the global pandemic.

Last year, FDI shrunk 11.1 percent to $20.75 billion. It was the second consecutive year on an FDI contraction and the smallest amount since 2014's $19 billion.

Signs of recovery were detected in the second half as FDI started to grow.

“Simply put, we believe the foundation of a turnaround to positive growth in FDI has been established [as of the first quarter] despite the ongoing Covid-19 [crisis],” said Park Jung-wook, head of the ministry’s investment policy department. “We believe that investment centered on M&As, which was suspended due to the spread of Covid-19, has returned.”

By industry, there was a surge in investment in services while investment in manufacturing fell, particularly in such areas as semiconductor, new materials and advanced cars.

FDI in services between January and March was up 57 percent year-on-year to reach $4.16 billion. In terms of investment that arrived in Korea, FDI rose nearly 93 percent to $3.98 billion.

In the service sector, IT investment surged 578 percent from $370 million in the first three months of last year to $2.51 billion. Wholesale and retail investment rose 267 percent year-on-year from $60 million to $220 million.

This sharp increase in IT was largely due to the investment by Germany’s Delivery Hero (DH) in Korea’s leading food delivery app, Baedal Minjok (Baemin), which it acquired.

The $2.1 billion that DH spent on buying Baemin accounted for half the FDI in the first quarter.

The government admitted that when excluding DH's investment, most investment shrunk. But it emphasized that there were other major investments.

“Most of the investments are made through M&As,” Park said. “But [FDI] doesn’t end with M&As as they can lead to additional increases in investment.”

Manufacturing saw FDI pledges decline in the first quarter by 28 percent to $450 million. By arrivals, it saw a sharper drop of 70.6 percent to $270 million.

The United Nations Conference on Trade and Development (Unctad) projects global FDI this year to shrink between 5 and 10 percent due to uncertainties including the distribution of vaccines, the new policies of the Joe Biden administration and Brexit.

Yet the Korean government expressed confidence that investment is likely to increase especially in its own Korean Green New Deal projects and in fourth industrial revolution technologies.

“New industrial areas especially ‘untact’ industries and online platforms including e-commerce, fintech and shared economies, which are expected to expand further in the post Covid-19, are increasing,” said Park. “We plan to announce a roadmap [to increase FDI] in the first half of this year.”