Phones by LG will become something out of the past

Phones by LG will become something out of the past 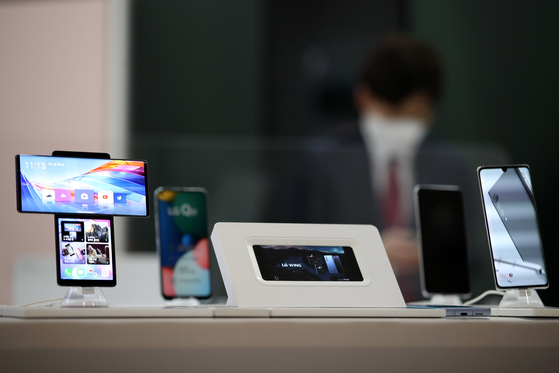 LG Electronics' smartphone set up for display at a store in central Seoul on Monday. [YONHAP]


After 25 years in the phone business, LG Electronics is hanging up.

Its board of directors approved Monday a dismantling of the company’s mobile communications (MC) division by July 31. The announcement came three months after CEO Kwon Bong-seok abruptly announced a review of the mobile phone business from scratch.

“The dominance of two companies was strengthening in the premium smartphone market, while competition in the affordable price segment was intensifying,” the company said in a Monday statement.

“LG Electronics failed to actively respond [to such market conditions].”

LG’s mobile business posted losses for 23 consecutive quarters, adding up to around 5 trillion won ($4.4 billion). The last time it saw black ink was in the second quarter of 2015.

The company spokesman denied rumors that LG failed to find a buyer for the division.

“After reviewing every possibility, we decided that suspending the business clearly has a strategic advantage in the long term,” he said.

LG smartphones won’t necessarily disappear from the market. The company said it will continue manufacturing handsets until late May to fulfill existing contracts with telecommunication companies.

For those using LG mobile devices, service support and software updates will be available for a while, but how long depends on the region.

All 3,700 employees in the MC division will remain with the company and be relocated to other sections of the electronics maker or among other LG Group affiliates.

Most of LG’s phones are made in Haiphong, Vietnam, where its production facilities were relocated in 2019 in a cost-cutting move.

“The factory also makes home electronics so there is room for flexibility for the facility to be used for other products,” said an LG spokesman.

As for the financial impact, the company explained that the suspension of the MC division will pull down LG Electronics’ revenue in the short term, but make long-term contributions to its business portfolio and bottom line. Last year, the MC division generated 8.2 percent of LG’s 63.6-trillion-won revenue.

Apart from producing smartphones, the MC division also headed research & development in a range of technologies including networks, cameras and software. LG will continue researching core technologies that might be applied to televisions, home electronics, electric auto parts and robots, it said.

The company emphasized that tech development in 6G networks will continue, as it is linked to important fields like autonomous driving and the Internet of Things.

But the smartphone business’s closure means the LG Rollable will never see light. The company had first hinted it was developing a handset with a rolling display last September.

At the virtual CES 2021 trade show in January, LG played a video that showed a smartphone growing into a size of a tablet as the display unrolls. The device was said to be planned for release this year.

LG Electronics has produced phones since 1995 and was once the country’s most popular phone maker. After its golden years in the late 2000s, the company’s market share plummeted as smartphones became the new norm.

In the past two years, LG has made efforts to shake up its mobile business, relocating production and releasing novel handsets like the dual-screen phone and the LG Wing, which had one of the two displays rotate 90 degrees.

But it couldn't break the decade-old dominance of Apple and Samsung Electronics in the high-end smartphone market. According to Counterpoint Research, LG Electronics was the third largest handset maker in Korea with 13 percent market share. Its share in the global smartphone market was around 2 percent.

LG Chem, Innerbottle to take recycling to your doorstep