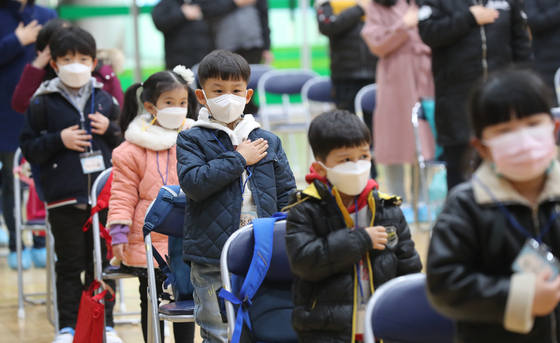 First graders at Ochi Elementary School in Gwangju attend their first day of class on March 2. The elementary school is one out of hundreds in Korea that has in recent years been experiencing a drop in the number of students. The newly admitted first graders at Ochi was less than 100 this year. [YONHAP]


After being open rain or shine for 68 years in Busan, Jwaseong Elementary School decided to throw in the towel and close down when its number of students fell below 50 last year.

The school is one of 50 elementary, middle and high schools throughout the county that closed down due to a lack of students last year. Since 1982, it is one out of nearly 4,000, according to the Ministry of Education.

The dearth of students across grade schools throughout the county is partly affected by both the low birthrate and high rate of urbanization across the country.

Korea has one of the lowest fertility rates in the world. Its fertility rate, which refers to the average number of babies born to a woman in her lifetime, hit 0.84 in 2018, the lowest among OECD countries that year. It rose slightly in 2019 to 0.92. 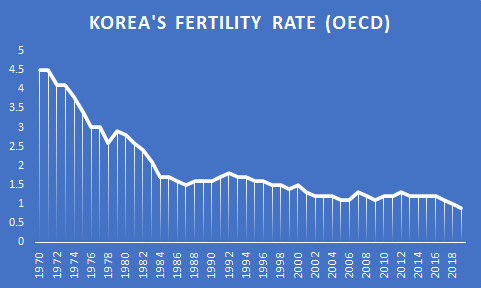 Since 2019, the population in the greater Seoul area — Seoul, Incheon and Gyeonggi — surpassed 50 percent of the country's total population, according to the Ministry of the Interior and Safety.

According to the Education Ministry, since 1982 there have been 3,834 elementary, middle and high schools throughout the county that closed down due to a lack of students. Of those, 66 percent closed between 1991 and 2000 — equating to around 280 school closures yearly during that time.

According to analysts, the speed with which these schools outside of the greater Seoul area will close down in the future will only pick up from here if the current demographic trends continue.

“The lack of students across elementary, middle and high schools will intensify in the rural regions and also lead to a lack of students across universities outside of the greater Seoul area,” Oh Jong-eun, a director at Jongno Haneul Education, a private cram school based in Gangnam District, southern Seoul, told the JoongAng Ilbo on Monday.

Of the 3,834 elementary, middle and high schools that closed down since 1982, 828 were located in South Jeolla, 729 in North Gyeongsang, 582 in South Gyeongsang and 460 in Gangwon, according to the Education Ministry.

Around 430,000 students enrolled as first graders in elementary schools last year, according to Statistics Korea. When last year's newborns begin their elementary education, the number of first graders across Korea will be around just 270,000.

Brace for a lack of vaccines