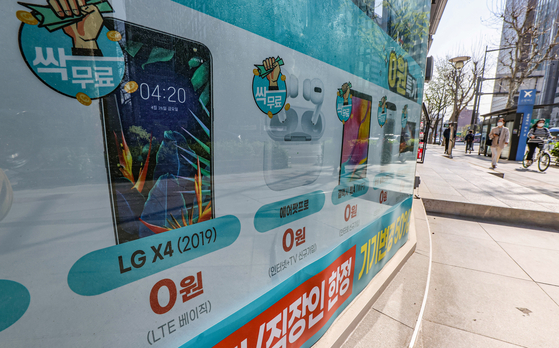 
The vultures are circling as LG Electronics calls it quits in the smartphone market, its 10 percent domestic share available for the taking.

Telecom operators are also adjusting to the abrupt departure of a mainstay brand, mainly with fire sales of devices that might be hard to maintain over time.

With the termination of phone production by the end of May and the ultimate end of the business set for July 31, major mobile carriers are pushing forward with heavy discounts and aggressive promotions to clear their online and offline inventory of the LG-branded handsets.

Korean consumers can now buy LG’s V50 ThinkQ model almost for free after receiving subsidies ranging between 600,000 won ($535) and 730,000 won depending on the carrier.

“We are adjusting subsidies depending on market conditions,” said a spokesperson at KT.

Multiple local media outlets reported that the carriers sold off a significant portion of the inventory.

Some customers may hesitate accepting the deals since the LG phones will likely lose appeal due to consumer concerns about software updates and after-sales service in the future.

LG Electronics' market share in Korea stood at 10 percent as of February, according to Counterpoint Research, while Samsung Electronics holds a firm 69 percent. Apple trails behind Samsung with around 20 percent share.

“In markets like the US, where LG is the third largest brand with a 9 percent share, Samsung will be doubling down with its affordable A series to capture LG’s prepaid share,” said Yi Dong-keun, research analyst at Counterpoint Research.

Samsung held an event for the Galaxy A72 and A52 this year, a first for an A-series model.

The shipment of Samsung’s smartphones significantly increased this year, with shipments up 40.2 percent in February on year, according to SK Securities.

The brokerage expects first quarter’s shipment to be 71 million units, but the average selling price of each unit will likely decline due to a large portion of the A-series devices shipped instead of S-series devices.

Of the estimated 71 million units, the Galaxy S models will be fewer than 30 million, the brokerage predicted.

In the domestic market, the Counterpoint’s analyst eyed on the re-entrance of Xiaomi.

“We have high expectations especially on Xiaomi since it is planning to re-enter the Korean market in 2021 and reach out with its new Mi11 Pro and Mi11 Ultra models and aggressive marketing strategies,” he said.