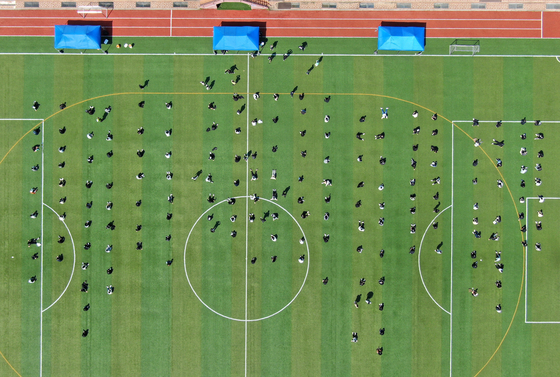 Students wait in line to get tested for Covid-19 at a high school in Dong District in Daejeon on Tuesday. Recently, teachers and students were confirmed positive with Covid-19 after a cluster of infections appeared at a cram school in the city. [YONHAP]


About a million Koreans have received their first dose of the vaccine as of Tuesday, 40 days since the country first kicked off its Covid-19 vaccination campaign on Feb. 26.

"The number of inoculators who received their first shots has now exceeded one million," said Kim Ki-nam, an official of the Ministry of Health and Welfare, during a regular briefing Tuesday afternoon.

As of Monday midnight, 999,870 people were recorded to have gotten their first dose of the vaccine, according to the Korea Disease Control and Prevention Agency (KDCA). This is about 1.9 percent of Korea’s total population of 52 million.

However, the slow rate of vaccinations was a cause of concern as the country only reached one million inoculators after more than a month.

Korea plans to inoculate 12 million people by the second quarter until June, meaning that they would have to inoculate 130,000 people per day. According to the KDCA, 35,970 people were recorded getting their first jab from the previous day as of Monday midnight.

Some criticized the government for belatedly setting up a pan-governmental Covid-19 vaccine task force team only after experiencing a war-like competition worldwide over securing vaccines.

Addressing the concerns, Kim said, "Related ministries have already been working together with the task force team to receive vaccines.

“Recently, there has been growing uncertainty in the vaccine supply, which is the same for all countries around the world. To overcome such a situation more wisely, we have strengthened the pan-government cooperation,” he added.

Health officials said that they are considering different options to prevent a shortage in coronavirus vaccines, possibly by restricting AstraZeneca vaccine exports which are produced on consignment in Korea.

When asked about the possibility of Korea restricting vaccine exports, KDCA official Chung Yoo-jin said Tuesday that the officials are “considering all possible measures to ensure that vaccines are properly introduced" to the Korean people.

"It is difficult to presume something specific while in the midst of reviewing the alternatives." Chung added, "We are reviewing possible measures as much as possible."

This response slightly differs from those made in previous briefings made by health authorities, when Chung said that they are “not considering export restrictions” on March 30. 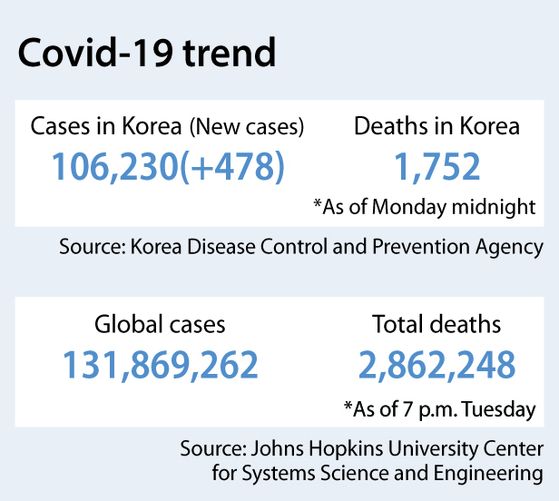 This is the second day in a row that cases stayed in the 400s.

Earlier in the day, Prime Minister Chung Sye-kyun said this week will be an important turning point to determine the direction of the Covid-19 epidemic in the country.

"A sense of crisis is heightening, with coronavirus cases spreading rapidly, especially in the greater Seoul area,” Chung said during a meeting with officials.

He urged anyone experiencing symptoms to immediately get tested to prevent further spread of the virus, and also called for the public's active participation in social distancing and quarantine.