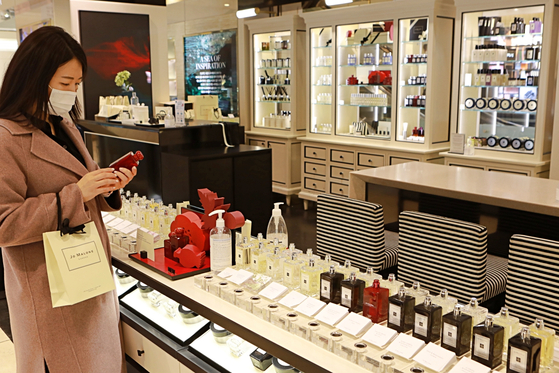 
Ji Mi-yeon, 67, a resident of Seocho District, southern Seoul, recently visited a nearby department store to purchase skin care cosmetics in preparation for the day when she will be able to walk outside without a face mask.

"I spent about 1.5 times more money than usual buying lots of cosmetics products including lotions, essence, creams and perfume," Ji said. "I was not able to go out that much last year due to pandemic, and the face masks caused me some skin problems."

"Now we are about to take off the masks and will be able to go out more often, so I need to take better care of my skin.”

While young Koreans splurge on luxury goods, people in their 50s and 60s are spending more on cosmetics products in the hope of going out as more of the country is vaccinated.

People in their 60s especially spent more. Their spending on skin care cosmetics products increased 23.6 percent during the same period.

Lotte Department Store argues that older people began taking care of their skin in the hope of taking off their masks and going out.

"Both online and offline sales of cosmetics products rose mainly driven by some brands that are popular among middle-aged customers including Sulwhasoo and Estee Lauder," said Kwon Jin-young, head of cosmetics sector at Lotte Department Store. "Since the social distancing measures were lowered to Level 2, our regular customers began visiting the department store more frequently."

"We've been running promotions and offering in-store beauty product testing, and they have been very helpful in increase in sales," said Kwon.

Perfume was particularly popular among old people. Lotte Department Store's sales of perfume in the first quarter of the year were up 38.6 percent compared to same period a year ago. The rate of increase is nearly double the previous year.

In the past, perfume was one of the beauty products that was typically popular for people in their 20s and 30s. But demand has spread to all age groups.

Diffusers from French perfume maker Diptyque were sold out at one point as more people are now interested in taking good care of their homes after they were forced to spend more time indoors, according to Lotte Department Store.

Luxury goods were popular in all age group. Sales of luxury accessories and jewelry, including those from brands like Chanel and Rolex, by people in their 20s and 30s jumped 53.1 percent in the first quarter of the year from same period a year before. Compared to two years ago, it rose by 100.6 percent.

Sales to people aged 40 or above surged 68 percent on year.

"Many people these days line up in front of stores even before we open shops," said a source from one of the luxury brands. "In cases of Chanel and Rolex, everything has been out of stock."