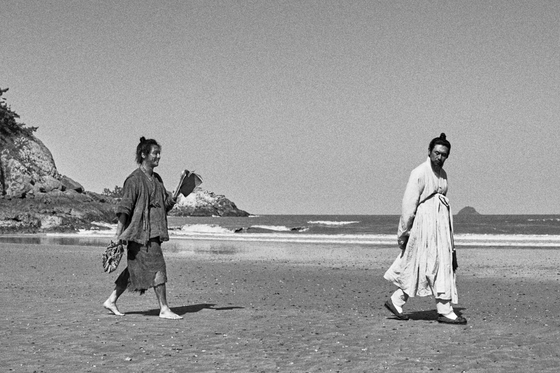 A scene from the black-and-white movie ″The Book of Fish″ with actor Byun Yo-han, who plays a fisherman named Chang-dae, and Seol Kyung-gu, who plays Joseon scholar Jeong Yak-jeon. [MEGABOX PLUS M]


English subtitles for director Lee Joon-ik’s “The Book of Fish,” a black-and-white historical flick about scholar Jeong Yak-jeon (1758-1816) will be available from Saturday at three Megabox theaters — at Coex in southern Seoul, Songdo in Incheon and Anseong in Gyeonggi.

Megabox Plus M said Friday that it decided to release the film, which has been ranking high in the box office since its release on March 31, with English subtitles as the story is “strong enough to attract foreign viewers.”

“The Book of Fish” depicts the story of Jeong when he was exiled to Heuksan Island during the Catholic Persecution of 1801, also known as the Sinyu Persecution, during King Sunjo’s reign in Joseon Dynasty (1392-1910). Jeong is played by veteran actor Seol Kyung-gu.

It was during Jeong’s exile that the scholar wrote a book on marine biology titled “Jasaneobo” to help decipher the 226 varieties of fish and marine life living in the waters surrounding the island. Jeong was the brother of universally recognized figure Jeong Yakong (1762-1836).

Director Lee said that he paid special attention to the translation as “it could be difficult to understand the story, especially from a foreigners’ perspective, if you fail to convey the meaning of Neo-Confucianism well in the context of the story.”

the book of fish movies