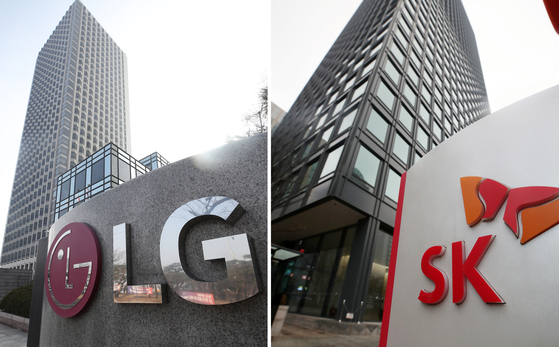 The two companies came to a last-minute agreement Sunday morning, a day ahead of the April 11 presidential review deadline to overturn the U.S. International Trade Commission (ITC) ruling which effectively banned SK Innovation from its EV battery business in the United States for the next 10 years.


Further details of the payments will be disclosed Monday through filings, the two companies said.

LG and SK also agreed not to fight over issues related to electric vehicle battery technology for the next 10 years in addition to dropping all patent-related litigation pending at courts in the United States and Korea.

“[The two companies] decided to cooperate and compete fairly for EV battery business growth both in Korea and in the United States,” said the CEOs of the two companies in a joint statement released Sunday evening.

“Especially, [the two companies decided to] join U.S. President Joe Biden administration’s push toward eco-friendly policies and fortifying battery supply chain. We appreciate the government officials in Korea and in the United States for trying to settle the issue.”

LG Energy Solution and SK Innovation, Korea's No. 1 and No. 3 battery makers, were locked in a fierce legal dispute related to EV battery trade secrets since April 2019, when LG filed a complaint against SK with the ITC for allegedly misappropriating trade secrets by hiring a group of LG's ex-employees, an accusation that SK flatly denied.

In February this year, the ITC made a final ruling siding with LG Energy Solution and slapped a 10-year import ban on SK Innovation in the United States, with a few temporary exceptions.

The settlement was unexpected, as the two companies had shown a drastic difference of opinion over settlement money and were not willing to back down. LG Energy Solution was reported to have asked for 3 trillion won while SK Innovation refused to pay more than 1 trillion won.

Korean Prime Minister Chung Sye-kyun had stepped in at one point, pointing out that the prolonged fight will only benefit their global rivals, such as manufacturers from China.

In fact, the EV battery market share held by LG Energy Solution, SK Innovation and Samsung SDI shrank to 29.5 percent this year as of February, according to SNE Research, from 41.2 percent last year during the same period. The share held by China-based CATL, on the other hand, went from 17.3 percent to 31.7 percent during the cited period.

While it was still possible for U.S. President Joe Biden to save SK Innovation's business with a presidential veto, that potential solution remained highly unpredictable as the trade secret misappropriation issue was entangled in more than one industrial and political agenda.

SK Innovation made it clear that it would exit the United States if the ITC ruling went through, scrapping a $2.6 billion investment plan in Georgia which was about to create 2,600 permanent jobs. The governor of Georgia and two Democratic senators from the state also made strong and continuous requests to the White House to exercise the presidential veto.

As much as the administration’s green initiative was an important agenda item, however, it would not have been an easy choice for Biden to forgo the country’s long-standing stance in protecting intellectual property rights.

The Washington Post described the latest settlement as a "victory for President Biden" and Bloomberg echoed the view, saying the agreement spared Biden from "choosing between undermining intellectual property rights or dealing a politically toxic blow to his climate agenda."