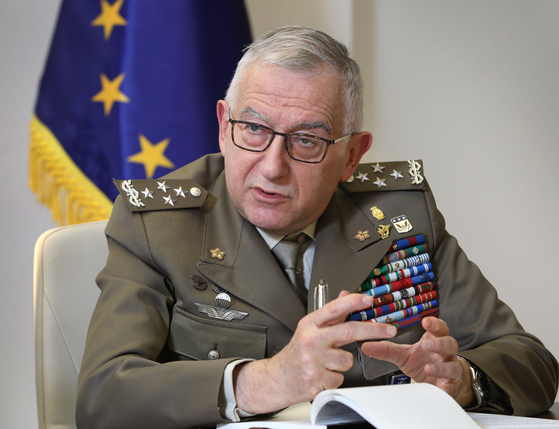 General Claudio Graziano, chairman of the European Union (EU) Military Committee, speaks with the Korea JoongAng Daily at the office of the EU Delegation in Seoul on Wednesday. [PARK SANG-MOON]


There is a growing push from both the European Union (EU) and Korea to cooperate closely on security issues in the Indo-Pacific region, said General Claudio Graziano, chairman of the EU Military Committee, during his visit to Korea last week.

“The Indo-Pacific is a very important strategic area for trade, security and defense and [cooperation] can be done only with countries with which we share the same values and the same will, like the Republic of Korea,” Gen. Graziano told the Korea JoongAng Daily at the office of the EU Delegation in Seoul on Wednesday.

The meetings have confirmed a number of values in security relations that Korea and the EU see eye-to-eye on, including maritime and cybersecurity threats, the general said.

The EU and Korea established what they call the Framework Agreement, which was signed in 2010 and applied from 2014. It outlines the basis for political, economic and security cooperation between the two parties.

One of the notable areas of cooperation between the EU and Korea on security is the Atlanta Operation, anti-piracy activities off the coast of Somalia. Korea has been participating by sending naval units since February 2017, with its most recent contribution in June 2019, when it dispatched its destroyer ROKS Dae Jo Yeong.

“I hope that we will have increased presence of Korea in [the Atlanta Operation] in the immediate future,” Gen. Graziano said. “As maritime crisis is not limited to specific regions, there may be a need for and possibility for an EU-Korea cooperation in the waters closer to the Korean Peninsula.”

Unlike the American approach to the Indo-Pacific, the EU does not have an overarching strategy for the region, but has maintained its partnerships on bilateral or sub-regional levels such as its partnership with Asean. The intention of the EU is to act in a flexible manner depending on the rising needs and situations in the region, including on issues related to China, the general said.

“The EU is a global actor and is working side by side with the United States, spreading peace and stability and diffusing tension,” Gen. Graziano said. “The EU presence in the Indo-Pacific can contribute to the [region’s] processes with China.”

The following are edited excerpts of the interview in which the general addressed pending issues on EU-Korea military and security cooperation in light of common security threats and what the EU attention to the region implies for Korea’s own diplomatic balancing act between superpowers. 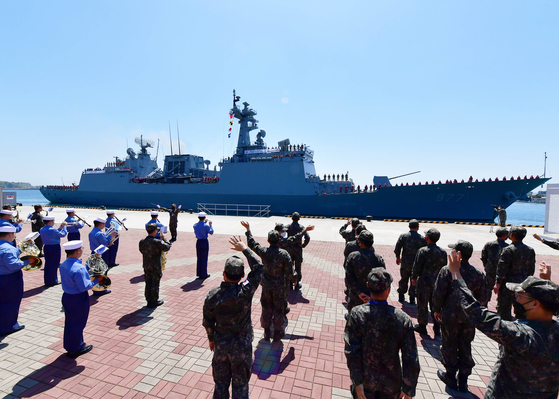 What is the main message that you are hoping to convey through your visit to Korea?
This is the first visit of the chairman of the EU Military Committee to the Republic of Korea and also the first visit [of a high-level official from the EU] since the pandemic. There is a strong symbolic message in the visit — the will of the European Union to cooperate, to work together, to foster peace and security globally and particularly in the area of interest of the Indo-Pacific.


Would you say that there is a renewed interest from the EU in the Indo-Pacific at this time?
Yes, absolutely. The interest was already shown by the global strategy of 2016 [which was] renewed in 2019. But in particular terms, the European Union already established a higher level mission and will to become a global security provider, working in what we call strategic autonomy of the European Union, and with partners in other areas.
The Indo-Pacific is a very important strategic area for trade, security and defense and [cooperation] can be done only with countries with which we share the same values and the same will, like the Republic of Korea [which include ] respect of human rights, freedom of trade, freedom of communication, gender equality, protection of civilian, rule of law and development of society.


The EU attention to the Indo-Pacific region coincides with that of other regional powers. The United States announced an Indo-Pacific strategy in 2019 and has pursued regional cooperation such as the Quadrilateral Security Dialogue that has been interpreted by China as generally anti-China. How would you say that the attention from the EU differs to that of the American approach to the region?
The European Union is a global organization in terms of its general [security] interests and it is starting to project its interest in this area. Of course, here, in order to work in the Indo-Pacific area, you have to find partnership and agreements with the United States. We are strong allies [...] but there are times in which our agendas can coincide or diverge.
As for our approach to China, it depends on the area of interest. For some elements such as climate change, we are partners, whilst for other issues we may be systematic rivals. The EU interest in the area is not to counter [regional powers], but to cooperate with them.


Historically, Korea has often been embroiled in superpower politics in the region. The EU is a group of nations with different foreign and security policy priorities, with experiences in navigating different security and foreign policy priorities within the group. What would the greater presence of the EU in security issues in the Indo-Pacific region mean for nations like Korea?
As you said, Korea is located in a key part of the world, where many interests of global superpowers are converging and confronting, including China, India, the United States and others. The EU has served missions in regions of the world where many interests were converging, such as in the Middle East. Our goal in these areas is to contribute to peace and stability.
There is a strong belief in the EU that partnership between the EU and Republic of Korea is going to be successful because both have the need and will for it. A good example is perhaps our cooperation in Lebanon. I was in Lebanon for three years [from 2007 to 2010 as the head of mission and force commander of the United Nations Interim Force in Lebanon]. My boss was Ban Ki-moon, then secretary general of the United Nations. It’s a good example of how EU and Korea can cooperate on security issues and complement each other as partners in crisis management, which will in result strengthen both parties as stronger actors in regions of cooperation.


You mentioned threats in the maritime area and cybersecurity as two prioritized areas for EU-Korea cooperation on security. Will this involve cooperation against cybersecurity threats from North Korea?
When we speak of cooperation on cybersecurity fronts, we are not speaking of certain regions or players, but cooperation on the topic. It looks like Korea is located far from Europe, geographically, but in the world of cyber dimensions, there are no geographical boundaries. Since Korea is very developed in the cyber arena, we are working closely together in this field.
If you consider the pandemic and the increase in communication via the internet, there are a lot of possible attacks in cyberspace. Korea and the EU have started working together in this area and we are looking forward to coming up with medium to long-term projects.

Speaking of peace and security in the Indo-Pacific, what is the latest EU stance on the deteriorating situation in Myanmar?
We have been following the situation in Myanmar closely, even before the coup, and the EU has already announced its view that it resolutely stands with the brave people of Myanmar who are defending their democracy. Particularly we as military professionals condemn the use of lethal force and weapons against unarmed people and unarmed demonstration.
We are asking for a peaceful solution in the interest of the people of Myanmar and to establish democratic rule.

Secrets of the Gen MZ (KOR)