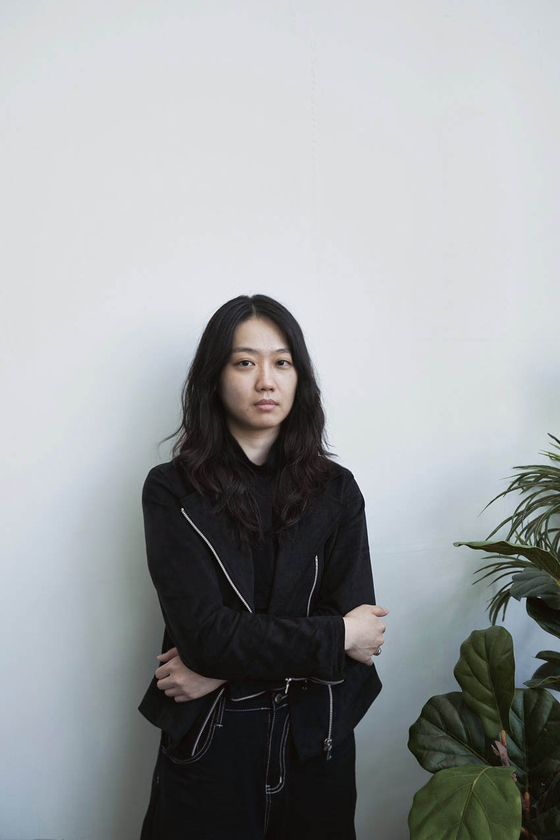 
When director Kim Na-kyung saw a drawing of dust art online by the artist Nikita Golubev one winter day in 2017, she broke down in tears.

“It was just one of those days when I was struggling with a deadline,” Kim said during an interview with the Korea JoongAng Daily last week. “I think it was a blog or something of the kind that had his collection of art, and that’s when I first came to know about dust art. The drawing that moved me was his ‘Praying Hands.’ I just felt consoled by it. And it was something of an eye-opener to see it drawn in the dust.”

The drawing, in fact, left such an impression on her that she crafted an entire story centered on it which became her debut feature film “Dust-Man.”

"Dust-Man" is about a homeless youth named Tae-san (played by Woo Ji-hyun) who reconnects with the world through his dust art after meeting an art student named Moa (played by Shim Dal-gi). Although the story focuses on Tay-san, it also embodies issues related to social minorities such as people who are homeless and people with disabilities. 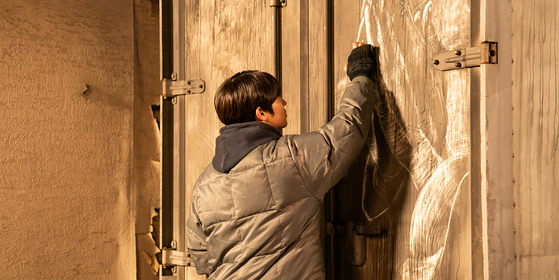 Tae-san (played by Woo Ji-hyun), who has been homeless for two years, begins to reconnect to the world through his dust art. [TRIPLE PICTURES] 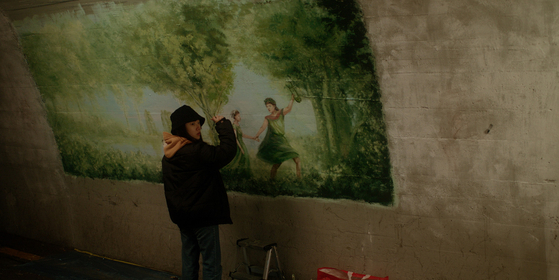 Moa (played by Shim Dal-gi) and Tae-san form a relationship based on their mutual interest in art. [TRIPLE PICTURES]


However, rather than taking on a judgmental tone, the film gently reminds audiences that for every person — no matter how trivial their presence may seem — there is a story behind them.

Kim linked dust and homeless people together through videos of social experiments that she saw online.

“[But] when I come to think of it, it’s those fragments of images, thoughts, or memories I had, those little things that suddenly came together to make sense,” Kim said. “There was that drawing, and I [remembered] seeing those social experiments. [One of them] was when someone dressed poorly and pretended to have a disability, and nobody helped the person except the homeless people. And I connected them with the quality of dust [where it’s considered to be worthless and bothersome to the majority] — [to write a story] about people who float around like dust.”

It took her about a year to finish the script. Kim spent three months tagging along with outreach programs run by non-profit organizations, visiting homeless people residing in Seoul Station, giving them food and hosting simple classes such as teaching them how to use cellphones.

“After I finished writing, I sent the script to the social workers for feedback,” Kim said. “I didn’t want to neglect anything or enforce stereotypes. I also met with documentary directors who covered housing issues and looked up papers and videos too. 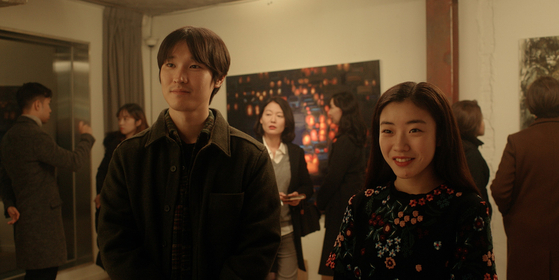 
“But since this film’s focus isn’t centered around realism, they [my advisers] commented more on the characters [rather than the social issues surrounding them],” Kim said. “The story almost has a fairytale quality to it as well.”

Since it all started from Golubev’s drawing, the director wanted the artist to personally create the art for the film.

“We were already in the pre-production process and there aren’t a lot of dust artists in the world to begin with,” Kim said. “And even though it was like a leap of faith, I wanted Golubev to work on the art since it all began from his drawing. When you look at his Instagram, his contact information is all there, but I thought it would be better if I could reach out to him via phone. There was an acquaintance of our assistant director who lived in Russia and we asked him to introduce him to us. And he came!”

Golubev visited Korea in the winter of 2018 and worked mostly on large-scale dust art such as ‘Praying Hands,’ a picture of Moa that Tay-san draws at the end of the film and a drawing the pair drew together of holding hands.

“The rest of the dust art that appears in the film was done by artist Rhee Ja-yun who majored in traditional eastern art,” Kim said. “My favorite pieces in the film are when Tay-san draws himself watching the view of the Namsan Seoul Tower on the dust-filled television screen. That was done by Rhee. My favorite of Golubev’s art is the owl he drew. That scene came out well, and I think that owl somehow resembles Woo (laughs).”

The film is not only visually pleasing but also a pleasure for audiences' ears. The playlist that Tay-san listens to and the ambient electronic music that follows his trail of emotions adds an element of sophistication to the film.

“I worked on the music with music director Cho Hyun-ryeong, whom I’ve been working with since my short films,” Kim said. “It was our first time to try out electronic music, because we’ve always been working with classics. But I thought the moment people hear classic music in this film, the time zone will suddenly go back to the 90s. Since I personally enjoy listening to ambient music, we decided to go with that and I wanted the overall tone for the music to be gray too, since “Dust-Man” is neither a genre film or a tranquil art film. I believe Cho composed about like 50 to 60 songs, but we weren’t able to use all of them.”

One of Kim’s music recommendations is the song “Belong” by artist Tender. She thinks the lyrics and the song’s tone represent Tay-san.

Kim is currently writing the script for her second film, tentatively titled “Control Tower,” which is set in an airport. But for now she is content to see “Dust-Man” on the big screen, and hopes the film can comfort audiences, just as she was comforted by Golubev’s work.

“It took me three years to complete this film, and I want to dedicate it to all of the staff and the cast who made it possible,” Kim said. “I’m grateful that they stood by ‘Dust-Man’ and I know that it’s huge luck for an independent film to be able to secure a release, particularly considering the circumstances. I’m just so grateful and thankful.”