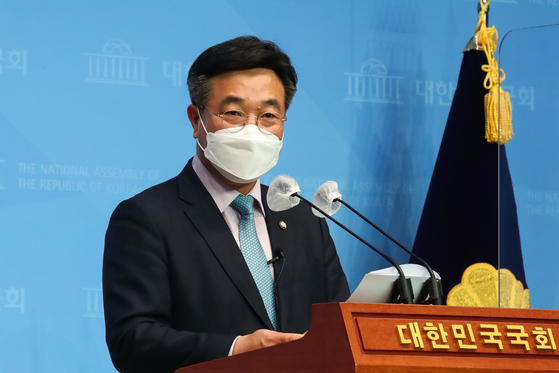 Rep. Yun Ho-jung of the Democratic Party announces his bid to run in the floor leader race in a press conference on Monday. The ruling party will elect the new floor leader Friday. [YONHAP]


The ruling party started a process Monday to find new leaders to lick its wounds from the crushing by-election defeats and prepare for next year's presidential election.

The Democratic Party (DP) will elect a new floor leader on Friday. This comes after DP Rep. Kim Tae-nyeon stepped down last week to take responsibility for the party's defeats in the April 7 by-elections, including the Seoul and Busan mayoral races.

Reps. Yun Ho-jung and Park Wan-joo announced their bids in separate press sessions in the morning.

Yun, a four-term lawmaker, is backed by allies of President Moon Jae-in. The 58-year-old lawmaker is chairman of the Legislation and Judiciary Committee of the National Assembly.

"I will reinvent the party to win the next presidential election," Yun said in a press conference Monday.

Yun said economic recovery this year depends on expanding Covid-19 inoculation and implementing a policy to boost consumer consumption. "I will review the pandemic response measures so far and create a more effective program," he said.

He also stressed that the National Assembly must be the center of all policy decisions. "I will create a strong cooperative system between the DP, administration and Blue House," Yun said.

Dismissing the public criticism that he had allowed the DP's railroading of controversial bills as the chairman of the Legislation and Judiciary Committee, Yun said "I have had some issues, but I see myself as a parliamentarian."

Yun's rival, Park, is a three-term lawmaker whose allies are former student activists. He once headed a fraternity of reformist DP lawmakers. 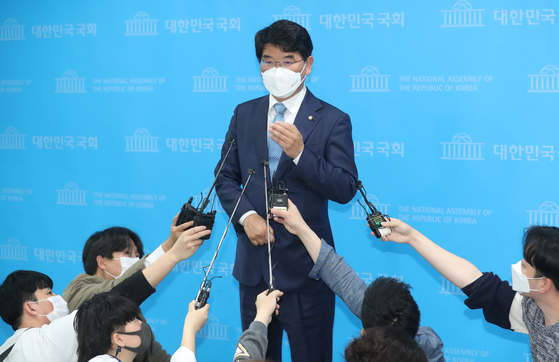 Rep. Park Wan-joo announces his bid to run in the floor leader election of the Democratic Party on Monday. [YONHAp]


"We must restore the values of the DP and win the people's support," Park said. "Through the April 7 by-elections, the voters made clear that they despise the DP. The people showed that the DP has no hope, unless we change and reform. And this is a golden time for the change and reform."

Park also said his goal will be seeing Moon's term successfully completed and ensuring the DP's next presidential victory. "All 174 DP lawmakers must repent for the past and work together," he said.

The DP lawmakers will have a voting on Friday to choose between Yun and Park as new floor leader.

The party will hold a national convention on May 2 to elect a new chairman. Lee Nak-yon, former prime minister who chaired the party since last August, stepped down in March to run in next year's presidential election.

The party will receive applications for chairman candidates on Tuesday. Reps. Song Young-gil, Woo Won-shik and Hong Young-pyo are expected to run. Hong, a four-term lawmaker, is a key ally of Moon.

Realmeter conducted the poll from April 4 to 9. The by-elections took place during the week on April 7, and Moon's DP suffered crushing defeats.

The DP's approval rating clocked in at 30.4 percent, up 1.6 percentage points from the previous week.

The main opposition People Power Party (PPP) recorded 39.4 percent, the highest since the party was rebranded in September last year after its major defeat to the DP in the April general elections.

The confidence level of the poll was 95 percent with a margin of error of plus or minus 2 percentage points. More information on the poll is available on the Realmeter and the National Election Survey Deliberation Commission websites.